Posted at 15:44h in Birds by projects 0 Comments 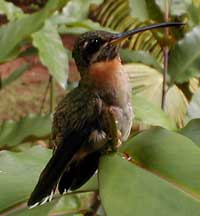 The Band-tailed Barbthroat (Threnetes ruckeri) is a medium sized hermit in the hummingbird family.  They are a common resident of wet lowland forest on the Caribbean and Pacific slopes and range from Guatemala on down to Western Venezuela and Ecuador.  They are often found along edges and the understory of old second growth feeding on mainly Heliconia, Calathea and banana flowers with their specially shaped decurved bill.  This and other hermit species can be found here at Friends of the Osa’s Osa Biodiversity Center

So what’s the difference between a Hermit and a Hummingbird?  Hermits are hummingbirds but they do have some characteristic differences between them.  Hermit feathers are typically brown, rufous, green, and gray in color and do not have the iridescent plumage that hummingbirds do.  There is often little difference in appearance between the sexes normally seen in most hummingbirds.  The Band-tailed Barbthroat is known for its round tail which is banded in black and white with two green center tail feathers which extend farther out looking as if they were dipped in white paint.

Interestingly, this hermit forms breeding leks.  Males gather in courtship groups also known as leks which is the traditional display ground where females come to choose their mate.  They are less aggressively territorial than hummingbirds which tend to defend particular flowers as their territories, hence the brighter iridescent feathers against their chosen flowers.  Nests are small cups attached to the underside of Heliconia or banana leaves up to 4 meters high; using the leaf as a bit of cover allowing for much needed respite during heavy rains.

We would like to thank Gianfranco Gomez from the Drake Bay Rainforest Chalet and Photographs by Bob Levy for their stunning photographs and allowing us to showcase them.  You can find them just up the coast from us in Drake Bay, Costa Rica.