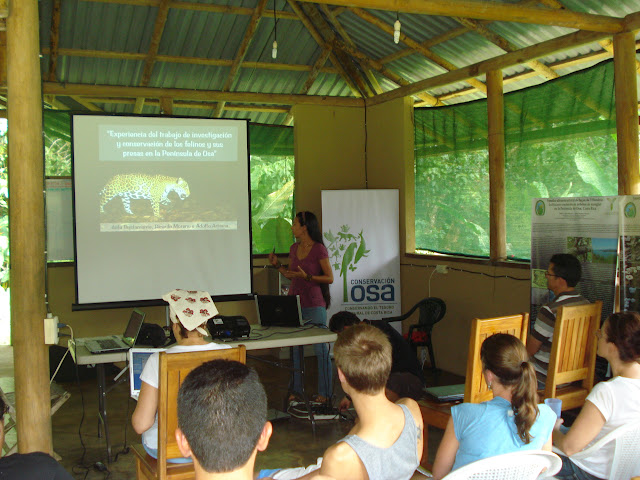 Osa Conservation recently hosted a science symposium at the Piro Research Center. The event brought together scientists and conservationists to share information and results from various research conducted throughout the Osa Peninsula.  The symposium was organized in partnership with representatives from ACOSA (Osa Conservation Area) and was attended by 14 presenters and many members of the environmental community.

The day began with welcoming remarks from Osa Conservation’s executive director, Manuel Ramírez and ACOSA research department head, Wendy Barrantes.  The gathering provided a space to discuss the current status of Osa’s diverse ecosystems and wildlife, as well as identify priority areas for further research. Participants identified the need for comprehensive studies of land use change in Osa, methodologies for estimating costs of environmental damage, calculations for carbon sequestration potential in primary and secondary forests, scientific techniques for recovering degraded forests and the development of a model to build incentives for reforestation in the peninsula.

The symposium strengthened communication and collaboration among scientists and environmentalists and also fomented the role of Osa Conservation as one of the main facilitators of research in the area. The event was a great success and we would like to thank the following presenters and all symposium attendees.  Thanks for making this year’s symposium a success!

Aida Bustamante, Yaguará
Research and Conservation of big cats and their preys on the Osa Peninsula

Gloriana Chaverri, Boston University
The Use of Social Calls in the Search for Bat Refuges