Posted at 16:58h in Science and Research, Sea Turtles, Volunteers and Visitors by Osa Conservation 0 Comments

by: Lauren Lipuma and Lindsay Metz 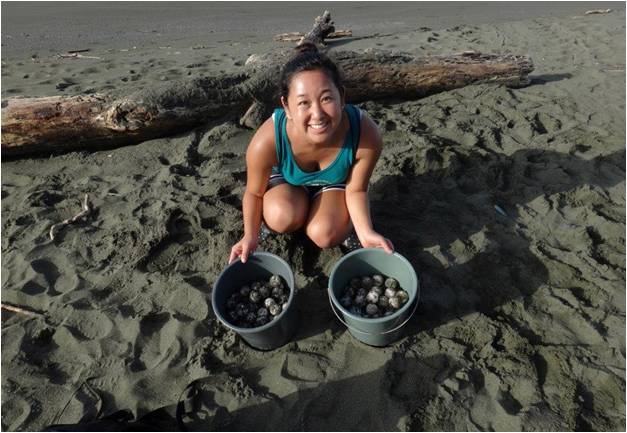 Volunteer Alisa Wang collects vulnerable turtle eggs from the beach for relocation to our hatchery.

The 2013 Sea Turtle Season at Osa Conservation has ended, and what a spectacular year it was! From the opening of the new turtle hatchery to the annual festival on Carate beach, it was an exciting and successful year for OC’s sea turtle conservation program.

The Osa is home to four species of sea turtles: Leatherback, Hawksbill, Olive Ridley, and Pacific Green. Our beaches mainly support populations of nesting Olive Ridley and Pacific Green sea turtles, but Leatherbacks and Hawksbills also make an occasional appearance. OC’s sea turtle season, which runs from July to December, coincides with the peak of Olive Ridley and Hawksbill nesting season. The peak of Pacific Green and Leatherback sea turtle nesting season will not begin until February and will last through March. During this low time, track sighting on our patrol beaches, Pejeperro and Piro, have been rare, and our hatchery is empty and excavated.  The month of December was a time for family and friends and rounding out all the collected data. Volunteers collect hatchlings in buckets for release on Piro beach.

It was quite a successful first year for our sea turtle hatchery. When nests are vulnerable, whether from predators, poachers or floodwaters from the nearby river,  we move them to our hatchery. Staff and volunteers always take extra care while moving a nest, and when relocated they will simulate an environment as similar as possible to the original nest. The depth and width of the nest is measured, and sand from the original nest lines the transport bucket as well as the new nest. If the nest was laid in the shade of the vegetation or the sun, our hatchery can accommodate either. This strategy seems to have worked very well so far – 92.6% of all the nests moved this year hatched successfully! With this strategy working well, having hatched thousands of sea turtle eggs, our hopes are high for 2014. 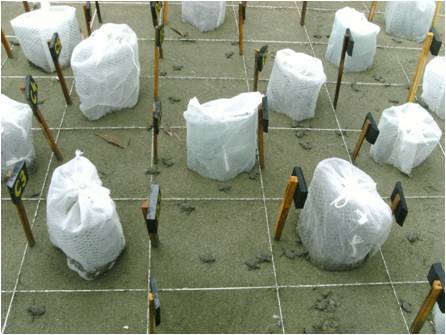 The results are in for turtle sightings and track records on our beaches.  This year we had 7 tagged turtles return to Pejeperro Beach and tagged a total of 136 new turtles between both Piro and Pejeperro beaches.  Almost all of the health assessments for sighted turtles were very good –  only one turtle had fibropapillomas (skin tumors caused by a virus) and two had barnacles.  Even shell, flipper, and skin wounds were rarely recorded. More shell damage was seen on Piro beach, which could indicate more off-shore boat activity near that beach.

As expected, the most commonly sighted turtle was the Olive Ridley (LO), but the Green (CM) takes a close second.  The Hawksbills (EI) are a new addition to our sightings recorded this year, but no Leatherback (DC) tracks or turtles were recorded.  As the graph shows, this was not the best year for our turtles and our sightings records have been slowly decreasing. The reason for this is unknown, but we hope with more data collection in 2014 we can start to solve the problems and the turtle population can rebound.