Posted at 16:13h in Uncategorized by Intern Osa Conservation 0 Comments

Osa’s Healthy Rivers has been working to conserve the water quality in the Osa Peninsula. 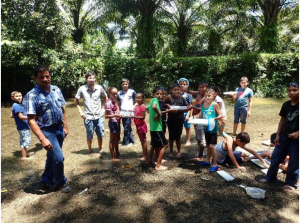 Figure 1. Group from The Gamba School monitoring The Gamba River, close to the Golf, May 2016.

This march in 2016, The Nation published an important article about the quantity and quality of water in Costa Rica, the critical theme in the work of Osa’s healthy river project, which monitors the quality of water in the river and ravines of the Osa Peninsula with the help of the participation from community groups. The article titled “Costa Ricans will have 65% less water per person by the year 2020”  shares the incredible news that each costa rican will use 19,000 m3 when in 1970  they used 55,000 m3. This critical decrease is due to all of the changes in the climate, the deterioration of the environment, and the growth in demographics. It is not only the quantity but also the quality of the water is diminishing, as Gueillermo Calvo of the Institute of Technology of Costa Rica show us in his two year experiment. He and his team of scientists took samples in the 10 river basins of the country, using the dutch index to measure the biochemical demand of oxygen, dissolved oxygen, and ammonia nitrogen in the water. They also measured phosphates, nitrates, turbidity and fecal coliform, this type of analysis also are carried out by the groups from Osa’s Healthy River Project. 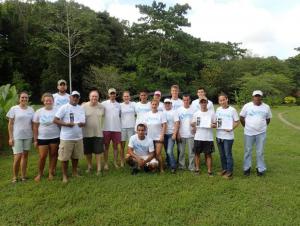 The results indicated a relationship between the population density and the contamination of water. They discovered that there was a notable exception with the Ricon and Tigre rivers on the Osa Peninsula, which do not have big populations around them but are contaminated by the produced pollution of fertilizers and human activity. Those two rivers are monitored usually by members of Osa’s Healthy Rivers, who monitor the state of the rivers in the time. Calvo’s experiment emphasizes the importance of Osa’s healthy river, not only in monitoring the rivers and streams of the Osa Peninsula, but also in educating and gain the participation of the members of communities in that region. 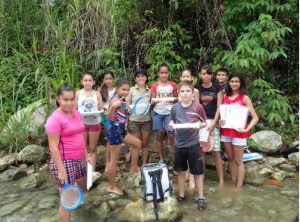 Today, Osa’s Healthy Rivers monitors 10 rivers and includes 8 community groups monthly,  it is expected that this number will increase in the future with the interest and participation of more people. The members of Osa’s Healthy Rivers perform visual, chemical, and biological monitoring, measuring parameters such as dissolved oxygen, turbidity, nitrates, conductivity, temperature, pH and coliform bacteria. The groups also evaluates the biological health of the monitoring sites using an index to measure the diversity of the species of macroinvertebrates in the river. With the support of a coordinator, who assists a lot of the monitoring, the groups collect high quality data and learn how to analyze and communicate the results.

The last discussion in The Nation article emphasized the role that the trees play in the quality of the water. The roots of the trees maintain the water in the soil and trap contaminants and nutrients before they arrive at the rivers and ravines. A new direction for the Healthy Rivers Project will focus more on the aspect forests and planted trees on the bank of the rivers. The members of Healthy Rivers, with the support of Osa Conservation, hope to continue and expand their work around the peninsula. Monitoring monthly in the rivers, planting trees, educating our young and neighbors… Healthy Rivers is fighting against pollution and wear of the water of our region, which are so important to the human race and their own environment. Please help us in this fight!