Posted at 16:56h in Uncategorized by projects 0 Comments

Strangler trees, mostly Fig trees, have evolved in a interesting way to take advantage of other trees for growing, especially in places where the thickness and canopy of the forest make scarce one of the most important elements in a plant’s life: light.

The Osa Peninsula, one of the most biologically intense places in the world has more than 700 species of trees and 3000 species of plants which, in terms of competition and survival, is a lot for a plant.

Under the canopy, being a small tree is all about competition. Competing for water, for nutrients and for space, but mainly competing for light. Whenever an old tree falls down or dies, automatically a gap is created providing light to new potential small trees. That is where the race for growing begins and only the fastest in growing will prevail.

Interestingly, fig trees evolved for being able to compete with other trees but growing backwards. These plants begin life as hemiepiphytes, when their seeds, often bird-dispersed, germinate in crevices atop other trees. 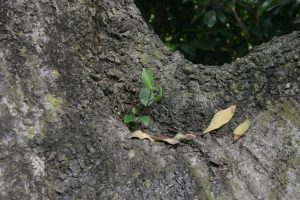 Strangler starting to grow on top of host tree.

These seedlings grow their roots downward and envelop the host tree while also growing upward to reach into the sunlight zone above the canopy. 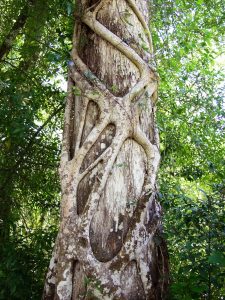 By having a different strategy, fig trees have been able to succeed in one of the most competitive ecosystems in the world reaching more than 20 different species in Osa. 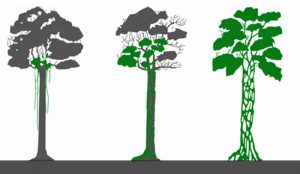 Strangler growing up as it embraces the host tree and reaches the ground with roots.

Since they depend on the structure of the host, and they grow multiple roots for constant support, sometimes they achieve funny shapes. 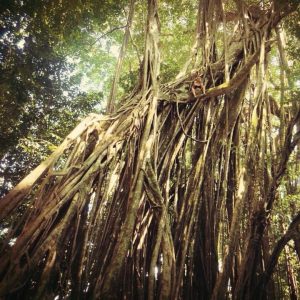 Once the strangler reaches the soil and becomes a big tree, the host starts dying since its resources become limited by this new tree, especially sunlight.

After some years of being a strong tree and having a dead host, it is common to find fig trees that are hollow in the middle where the host used to be. 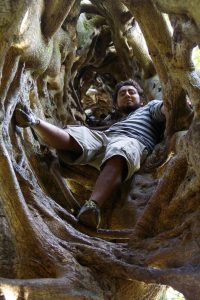 In the race for adaptation and survival, fig trees have had to evolve to get to the goal faster than hundreds of other species that competed with them by not following conventional procedures, such is the key of evolution, to explore ways that no one did before.