Posted at 14:04h in Uncategorized by projects 0 Comments 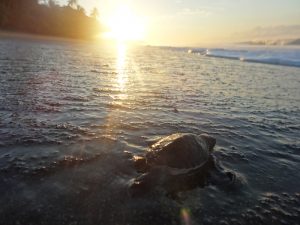 My name is Sofia, I am originally from Sweden, I have a Master’s degree in conservation biology and I have been on Osa Peninsula working as a Research Field Assistant for Osa Conservation for two months. I work for the Sea Turtle program, collecting data and working with turtle conservation based on nesting activity on the two beaches Piro and Pejeperro.

Sea turtles are endangered species. Some of the biggest problems are habitat destruction, climate change and human threats, both in water and on beaches where the turtles lay their eggs. It is well known that conservation efforts concerning sea turtles need to be focused on the life stage where efforts make the biggest impact on turtle population growth. The general idea is that conservation efforts focused on adult and large juvenile survival is more important for population size and growth than a focus on the eggs and hatchlings. This theory suggests that putting effort and money on reducing mortality in late life stages, such as altering fishing practices, would be the key to population recovery.

Sometimes I ask myself: Why do I do this? Why do I travel across the world, expose myself to venomous snakes like the infamous beast Terciopelo and unpleasant bugs biting me until it’s hard to find a spot anywhere that is not itching or big waves playing a bit too rough? After 5 years of university studies I still choose to work for only food and housing in a place so far away from everything familiar, and I work with sea turtles at a life stage that does not have a big impact on the population size of the species I am fighting to save. While the rest of the world has its own interests. It might be building a big hotel close to the beach with lights that confuse the turtle hatchlings on their way to the ocean, it might be the fishing industry wanting to harvest as much as possible before anybody else does even if they end up with a big by-catch of sea turtles, it might be a broke old Costa Rican man trying to find food, sea turtle eggs, for the day.

The truth is there are a few reasons for me being here. I like traveling and the best way to experience a new environment is to live in it. Maybe I will always keep searching for a place where I fit in. Saving baby turtles is good for raising awareness and it is good publicity for the issue as for conservation in general, baby turtles are easy to like. Even if the survival rate for them is very low I believe it is important not to forget about this early life stage and the beach habitat. But the most important reason for me to walk up and down these neotropical beaches every day is that I live for what I do and for what I believe in. I can’t just sit and watch the other interests destroying these beautiful beaches with dark sand and coconut palms everywhere, destroying that playful blue ocean by exchanging the fish with plastic or driving another species to extinction. There is a difference between science and theories and actually doing something about the things you believe in. Sometimes, to keep the strength to fight, I need to feel like I’m doing something real. I believe that as long as there are people willing to fight we can still win and many more people after me can come here to visit these beaches and experience the excitement of finding the tracks of a mom-turtle to the nest where she laid her eggs or even be lucky enough to witness the hatchlings first strokes in the water. But to whoever comes here next: lower your standards, don’t stay at the big hotels at the beach. Take a walk on the trails in the rainforest and truly experience it instead. Smell all the smells, listen to the sounds of the Macaws and watch the lizards run away from you. And don’t do it for the pictures you want to show your friends, do it for yourself and for the ecosystem we are all a part of.