15 Apr What are BCATs? Why is their conservation absolutely critical?

Posted at 17:10h in Uncategorized by InternUser Osa Conservation 0 Comments

Black-cheeked Ant-Tanagers (Habia atrimaxillaris) may not be most glamorous bird on the Osa Peninsula.  They lack the striking colors of a Scarlet Macaw, or Fiery-billed Araçari, and are mostly dull black, with just a splash of salmon in the throat and breast.  Their vocalizations won’t send a chill down your spine like the eerie pan flute-like songs of a Common Potoo, and consist instead of a slurred two or three note whistle of a song.  However, these superficially lackluster attributes belie a truly fascinating species, and one that is important to conservation on the Osa Peninsula. 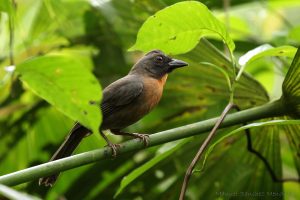 Black-cheeked Ant-Tanagers, or BCAT, to use the four-letter bird banding code and save a little breath, belong to the genius Habia.   This genus of birds’ common name, Ant-Tanagers, comes from their behavior of joining the mixed flocks of birds that follow swarms of army ants in order to catch the insects and other small invertebrates that attempt to escape the relentless predatory ants.   Some other members of Habia are obligate ant followers, which means following ant swarms is their main strategy for finding food.  BCATs will follow ant swarms if they are present, but that strategy is not their primary source of food, so they are classified as opportunistic ant followers.  They mostly feed by foraging at the lower levels of the understory of primary and well-established secondary forests.  Intently cocking their heads while searching, sometimes comically falling about on broad palm leaves, and snatching up the insects, spiders or even small lizards that they find.  BCATs also occasionally eat the fruits of some understory plants.  They usually live in small family groups, consisting of a breeding pair, and often at least one of the offspring of the previous year’s successful brood.  They keep in contact with frequent noisy chatter, and when they are nesting, it seems everyone chips in to help feed the new hatchlings.

Perhaps most importantly, BCATs are endemic to the Osa Peninsula and the lowlands along the coast of the Golfo Dulce.  “Endemic” means they cannot be found anywhere else in the world, or even elsewhere in Costa Rica.  Their very limited range, and shrinking habitat have led them to be listed as Endangered by the IUCN.  Any threat to the region is a threat to the health, and even the survival of the entire species.

As with many tropical bird species, little research has been done on BCATs, and there is much that we don’t know about them.  I came to Piro Research Station and Finca Osa Verde in an attempt to assess the density of the BCAT population here, and to gain some insight as to their habitat preferences.  This involves repeatedly visiting randomly chosen points in different forest types, and counting the BCATs I can detect by sight or sound during a ten-minute period.  I also carefully estimate the distance at which I first detect them with the aid of a laser rangefinder.  I am still early in this process, but with enough data, and careful analysis, I hope to add to our understanding of this species’ health, and any threats there may be to its stability.

The wonderful people and scientific resources here, as well as the pristine old-growth forest, long-standing secondary forest, and even the sustainable farm and reclaimed pastureland that are protected by Osa Conservation are essential to my study, and many others like it.  I hope that my work can be a small part of the critical efforts being made at Osa Conservation to better understand and preserve this uniquely beautiful, and remarkably biologically diverse corner of the planet.