06 Nov A little luck and a fun(gi) story

Read about Grace Leppink’s experience in the Osa as she makes exciting fungi discoveries!

Fungi are found throughout the world, but some of the most amazing and diverse fungi are found in Costa Rica.  The combination of deeply shaded forests and a warm, humid climate makes Costa Rica the perfect incubator for fungi.  As a new mycologist, the opportunity to travel to Costa Rica was one that I could not pass up.  On my first day at the Piro Research Station I had an exciting and lucky encounter with fungi. 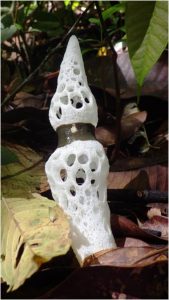 We were in the thick of the forest on the Ajo Trail. As we rounded the corner we found our prey under the canopy of a giant tree. The intricate lacework of its body was accented by the few rays of light the canopy allowed through.  We had come across a stunning specimen – the strangled stinkhorn, Staheliomyces cinctus.  When I first laid my eyes on it, it seemed out of place compared to the brown and green hues surrounding it.  This white alien shape seemed to protrude out of nowhere, like some weird organic artifact. As my professor joked later, it was the best accessorized fungi he had ever met, as it wore a thick shiny black belt – of slime containing its spores.

Same fungus, same day. Starting to collapse! It was undetectable a day later.

This stinkhorn is uncommon and not well documented. One reason is due to the short time that the fruiting body exists.  The structure rarely lasts more than a day before turning into messy lump of black goo.  If my group had not gone out to that trail on that morning we might only have found a shriveled shadow of its former glory.

In the following weeks I hope to continue my documentation of the fantastic fungi by looking at the secondary and primary forests of the OSA peninsula!