10 Oct A young herpetologist is born

Posted at 00:47h in Science and Research by Osa Conservation 0 Comments

Two years and half ago I was just starting my adventures at Osa Conservation. I started like almost everyone does, as a Research Field Assistant on the Sea Turtle Program. 5 months working alongside Manuel Sánchez, were enough to fall in love with the Osa and discover part of its secrets thanks to him. The Golfo Dulce Poison Frog was one of them.

After that, I joined the Restoration Program. I began monitoring tree growth and amphibian populations on restoration areas. Every morning and afternoon, I would spend my time around the trees, with Agustín Mendoza, Ruth Pillco and Marvin López as my mentors. At night, I would go, with my headlamp and machete as my most loyal companions, looking for frogs and toads.

Few months later, Andy and Adrian encouraged me to create a project for the Golfo Dulce Poison Frog (my first frog love) using my skills on telemetry. It was hard, and each day was harder than the previous one. Creating my first proposal by myself was tough, but as much as looking for funding for the project. Alongside Wildlife was my first grant. Enough to create a pilot project a give me that little push to keep going with the project. But it was on september when everything changed after an e-mail from Stiftung Artenschutz (Amphibian Conservation Fund). This e-mail changed the course of what I already thought it was not going to happen. I was finally able to create the project. Later, alongside Michelle Monge, we were able to get Rufford Small Grant. We were then all good to go!

Aiming to raise awareness about the species and its importance and train people on its monitoring. I traveled all around the distribution range of P. vittatus, giving workshops and talks, and looking for new populations. I ended up creating a network of people from communities, private landowners, local guides and lodges who were eager to protect the Golfo Dulce Frog. Showing people how to use iNaturalist and its application for this project was of great value. It made far easier to share among all the community and inform a new population discovered. At the beginning of the project, there were 40 observations on iNaturalist. On 27th of September, we counted with 103 observations registered.

May arrived, and so the toughest part of the project. It was time to go and track individuals of the species to expand our ecological knowledge about its basic ecology. I started using VHF-telemetry, widely used for wildlife tracking. After breaking my head on how to attach those transmitters to the frog without hurting them nor affecting to their behavior, transmitters started giving problems. Happiness did not last long… It was time then, to find as soon as possible a new alternative. I finally came out with the idea of using Harmonic Direction Finder (radar technology by RECCO). This time, the receptor/antenna, would emit a signal that would be reflected by the transmitter carried by the frogs, allowing us to find them easily. In total, I followed 21 individuals through the rainforest and discover part of their secrets. Still, after so many months, I leave with more questions than answers about this frog. 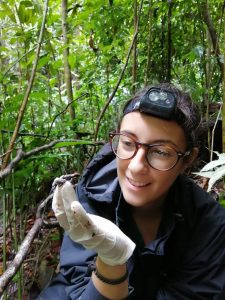 My field work with this project ended, and so my time as a staff member of the OC family. Looking back, I do not have anything but love for every person I have met here and for this magical place that I am lucky to call HOME. Hoping to come back soon alongside frog lovers and to discover more about this little hoppity hop friend of mine I part looking for new adventures.