We find ourselves in the middle of a project titled “Conservation and Management of Marine and Forest Resources in the National Terraba Sierpe Wetlands.” Our associates are APREMMA: a local community of fishermen and piangüeros working out of the Ajuntaderas area, a small community off the Southern Pacific coast of Costa Rica. This newly formed group is looking for a method to develop a healthy relationship between their community and efforts to conserve the local wetlands.

APREMAA, like many of the local communities throughout the country of Costa Rica, still maintain a great level of distrust for external organizations, interpreting their work as being “urban,” and having “first world” aspirations in their investigations, projects, studies, and diagnostics. 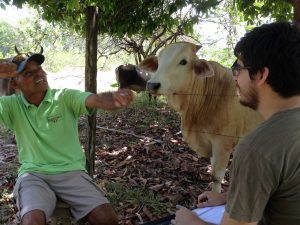 Is there a stranger in the photo?
OC staff during an interview with locals throughout an APREMAA diagnostic.

For some it may be hard to reach the conclusion as to why a local community might be unwilling to work with outsiders, but we must first take a look at the whole picture before making this sort of judgement. Take this example into account: Imagine that a UFO landed in front of your home – If that image seems weird, I would agree, but take the time to actually imagine this scenario. The Alien comes out of his craft, and somehow you manage to partially communicate with one another; You speak two different languages, but you are able to come to some sort of communal understanding. The alien wants to know about your life, and how life works on your planet. You go ahead and share all of your problems with the alien: war, famine, misogyny, everything. To you, at first, it seems only natural that an Alien who lands in front of your house might have the resources to help alleviate all of these issues, right? The Alien offers to perform investigations that will help detect where these problems are stemming from through the use of discussion and workshops.  You willingly share your knowledge with the Alien about your society, and take notes on all of the workshops and meetings throughout. After analyzing all the information you have given them the Alien decides to publish his findings in an intergalactic science magazine, and then gets in his shuttle and goes home. The issue with this scenario is that you are still left with all the problems you originally described, and worse off, you are also left with the hopes that you once had to solve your problems with the Alien. You are essentially left high and dry, and at that moment you think to yourself, “I shall not again open my doors to another alien.”

This example, though ironic, reflects the work that a lot of NGO’s have done in the past with foreign communities, and for that matter, work they will continue to do as well. This metaphorical scenario reflects how we as NGO’s are viewed by these local populations, who have come to harbor so much distrust and resentment to outside coalitions. And to be fair, this resentment may be very well justified. NGO’s have become accustomed to disrespecting communities by extracting the woes of locals and thusly empowering themselves off this information as if it were gold. NGO’s operate only as “distant observers,” as alien who would rather impose external knowledge. The truth is that NPO’s are undoubtedly guilty of these actions – sometimes without the intent, and other times on purpose, but this is the reality of their situation.

It is with this in mind that we who are working on this “Conservation and Management of Marine and Forest Resources in the National Terraba Sierpe Wetlands” project are attempting to incorporate ourselves into another type of work asides from the general extraction of knowledge. We aspire to work backwards from the usual scenario, and to work from the bottom-up. On one side we want to desperately understand the needs of the community that we are working within, all the while at the same time helping realize the aspirations of these existing needs. We believe that the needs of a community cannot just be recorded, they must also be solved in order for this exchange to be truly beneficial.

With this being said, we have outlined some of the internal dynamics that have already been reached between ourselves and APREMMA:

Out relationship with the members of APREMAA may be new, but we are already looking to turn the general distrust and resistance of outsiders into a situation of cordiality, open dialogue, trust , and cooperation in order to continue building real knowledge. We arrived from the outside, from far away, like aliens – but we are trying to incorporate ourselves to this local lifestyle and culture with the hope of becoming more human in the process.