02 May An Underappreciated Ally

Posted at 18:21h in Uncategorized by Intern Osa Conservation 0 Comments 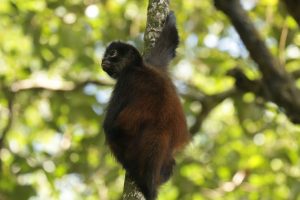 The Osa Peninsula is a stronghold for the Central American spider monkey, an arboreal acrobat adapt to navigating the rainforest canopy. Studying these dynamic mammals can be a challenge, as they don’t give up their secrets easily.

To study spider monkeys, one must track them from the moment they wake to the moment they fall asleep. With the closed canopy that blocks out fading daylight from those on the ground, the arduous adventure must start the day in the dark and end it in the dark.  However, the spider monkeys have a  few extra precious moments of sunlight in the treetops, which ensures their escape from the prying eyes below before settling in for the night.

The Spider Monkeys and the Trees

Spider monkeys love fruit.  In fact, 83% of their nourishment comes from a multiplicity of jungle fruit trees. Furthermore, the future of these trees depends on the spider monkey. Unlike mammals, trees in the tropics must grow far away from their parents. Because of the spider monkey, their seeds are spread over hundreds of kilometers.  This co-dependency feeds the spider monkey’s appetite and ensures that the fruiting trees are able to flourish.

Spider monkeys have a particularly dependent genus of tree called Dialium. The Dialium grows slowly, and meticulously intakes atmospheric carbon into its broad trunk, resulting in the hardiest of hardwoods.  But the Dialium seeds can only hope to start their voyage of growth if they pass through the turbulent acidity of a spider monkey’s stomach. 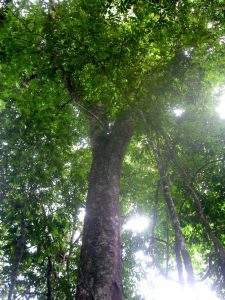 After spending a great amount of time tracking the elusive spider monkeys, we found their secret sleeping spots.  So what happens when the spider monkey settles down on a buttressed branch for the night after filling their bellies with fruit?  The result is not the prettiest, but completely natural: a heap of feces and seeds are scattered sporadically over the rainforest floor and understory.  Though to the eye the spots where a spider monkey sleeps may be subtle, the smell won’t be. 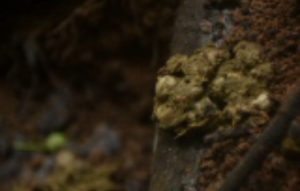 Determining the sleeping sites of spider monkeys is part one of mission ecology accomplished; part two begins the strenuous journey of climbing the trees. Unfortunately for the climber exploring the spider monkey’s domain, these monkeys call the tallest trees in Central America’s rainforests home.  In these trees, the climbers place camera traps, our artificial forest eyes, to record the spider monkey’s activity at all hours. By doing this, we no longer solely rely on the human observer to track these important primates. 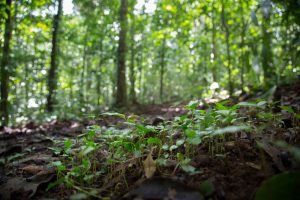 Though the nature of spying on spider monkeys can sound a little creepy, we must consider their endangerment.  By learning more about their behavior, we can further work towards their preservation.  In fact, spider monkeys are our allies in the fight against ecosystem degradation and climate change.