12 Aug Aquaculture: A Sustainable Solution to the Global Seafood Crisis?

The world’s seafood stocks will have completely collapsed by the year 2050, scientists say.  According to a study done by a group of economists and ecologists, the growth of the human population combined with unsustainable fishing practices and the devastating loss of biodiversity will lead to the collapse of fish populations in the next 35 years, if trends continue on their current path.

If the idea of losing all of the world’s fish scares you as much as it scares me, then you’re wondering how we disrupt the current “trend” of unsustainable overfishing.  One option is through the use of aquaculture.  Aquaculture, also known as fish or shellfish farming refers to the breeding, rearing, and harvesting of plants and animals of water environments including ponds, rivers, lakes and the ocean.

Although the global community is just beginning to think of aquaculture as a potential solution to the dilemma of depleted oceans, the fact is that it’s not a new practice. In fact, although historians say that the cradle of aquaculture existed in China 4,000 years ago, recent archaeological evidence (2003) suggests that the Gunditjmara tribe of Australia already had a system to raise and cultivate eels in in the southeast of the country 8,000 years ago.  The system was so efficient (after being designed as an alternative method for procuring food) that traditional practices remained stable throughout history!! Or at least not until Stephan Ludwig Jacobi appeared on the scene, at some point in the early XVIII century.

Thanks to Jacobi and his article ‘Von der künstlichen Erzeugung der Forellen und Lachse’, aquaculture became a part of mainstream science due to the success based off of his experiments in the external fertilization of trout and salmon. Not only in terms of self-sustainability, but also of commerce at an industrial level. From then on all manner of projects and investments began, and thus was born the second generation of aquaculture─ the modern aquaculture we all know today, and which is currently reinventing itself to adapt to a society increasingly aware of its impact on the environment.

Part of this shift in the way aquaculture utilized is the utilization of what’s called Integrated, multi-trophic aquaculture.  While it sounds complicated, it’s an idea that involves the raising of diverse organisms within the same farming system, where each species utilizes a distinct niche and distinct resources within the farming complex.  This allows the fish to be raised in a much more biodiverse, nature-like setting. Additionally, this system utilizes a circular economy–the idea that the waste from one product serves as nutrients for another.  So, raising plants and fish together both cuts down on cost and waste. This current of change, in conjunction with the holistic approach that Osa Conservation has in regards to conservation, is what prompted the organization to plan the future fusion between a multi-trophic aquaculture project (still in development), and its already successful sustainable agriculture program. A large number of scientific publications (many published by the Food and Agriculture Organization of the United Nations) support these projects, and the tropical climate of Costa Rica is perfect for local breeding of sea creatures.  What’s the harm in trying? 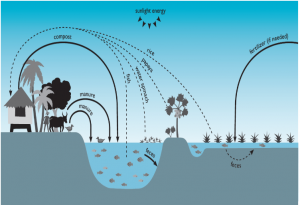 If successful, this new project of integrated, multi trophic aquaculture would be extremely beneficial in the following three areas:

The integrated, multi-trophic aquaculture system mimics the relationships among organisms in the natural world (not just by raising aquatic organisms and terrestrial plants together, but also by using one organism’s waste as input for others).  It also ensures both the optimal use of resources and the reduction of water pollution and eutrophication levels.

This new and improved system of aquaculture represents a positive step towards the self-sufficiency of Osa Conservation, and as such also represents a reduction of costs in terms of food imports from San Jose. Likewise, the implementation of a new food cultivation system could mean new employment opportunities for locals.

Not only is the integrated, multi-trophic aquaculture system is easy to understand, but it has the potential  to include human waste as part of its cycle. That means that both the system’s facilities (eg tanks external fertilization, duck ponds, rice fields, etc) as food produced through it (eg shrimp species, and native fish) have potential to serve as educational material for both the local community and visitors of Osa. What better way is there to learn about aquaculture, than to see how everything works and then personally taste the final product?  Adopting a system of aquaculture in the Osa will allow OC to expand upon its teaching capacity and further embody its own standards of sustainability.

9.“Food from the sea. Remarkable results of the experiments in cod and lobster,(Pittsburgh Dispatch. aquaculture, 1890): https://www.newspapers.com/clip/3798097/food_from_the_sea_remarkable_results/