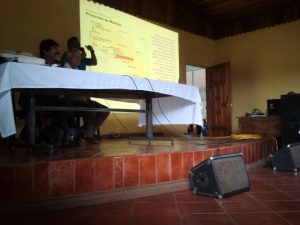 For the last two weekends, hundreds of people from Puerto Jimenez and surrounding towns have crowded together into small hot rooms for hours on end to engage in heated discussions about a very important current affair that is getting people talking in the Osa Peninsula. And there’s not a soccer ball in sight.

The events are a series of community forums revolving around a proposed development project. Five hour long public forums; democracy can be painful.

The project in question is a marina and mega resort-style complex that the owners of Crocodile Bay Resort, an all-inclusive sport-fishing resort in town, want to build out into the waters off the town’s public beach. This would be the first marina to be built on the Osa Peninsula or in the Golfo Dulce, a globally unique marine ecosystem.

The project was first proposed in 2007, and was strongly opposed by Puerto Jimenez’s local representative civic organization, the Integrated Development Association, due to the environmental damage and negative social impacts it might cause.  For years, Costa Rica’s environmental authority MINAET – whose technical office SETENA is responsible for evaluating the Environmental Impact Statements of big projects like this marina –  put a hold on approving the permits to allow any construction.

But earlier this year, unbeknownst to most people, SETENA approved the permits for Crocodile Bay Marina – or rather, for a newer, bigger version of the Marina (with 259 slips) and a complex of hotel buildings, stores and condominiums able to house over 1000 people, bringing the controversy back to the fore.

Proponents of the project argue that the marina will create several hundred new jobs, stimulate the local economy and even help clean up the water of the Golfo Dulce – all things that would certainly be a boon for Puerto Jimenez. Detractors counter that the marina will significantly increase boat traffic and sedimentation in a fragile ecosystem, risk harm to endangered marine mammals like humpback whales and hawksbill sea turtles and foster various negative social dynamics, most importantly that the jobs created by the project are actually for people from outside the local community who speak English or are otherwise better trained.

Opinions vary widely in the community – but they are strongly held. In the pair of forums held these past two weekends, we watched person after person stand up to the microphone and launch impassioned arguments about generating jobs, the benefits (or lack thereof) of ecotourism, and the role of foreigners in the local economy.

One proponent lauded the wealthy tourists and investors who come to “give back to the area” while insulting budget travelers. A blazingly articulate high school student then took the stage to say that it was precisely these budget backpackers who actually ate in the corner sodas(luncheonettes), bought local produce and stayed in locally- owned cabinas. Both people spoke to loud applause. 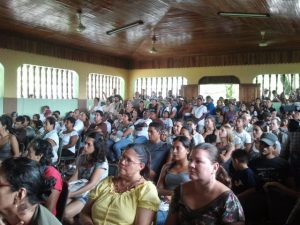 Concerned residents listen to opposing views about the development project

The discussions happening here are about much more than a marina; they are about the model of tourism and development that residents here want to see on the Osa. Will it one day be a landscape of large resorts and 4-star chain hotels with hundreds of yachts anchored offshore, where prices are too high for many Costa Ricans to live comfortably? Will the natural beauty, tranquility and small-town atmosphere that are precisely what draw visitors be diminished in the name of “development” here as in so many other places? Or can the Osa community build a different model here, one centered jointly on ecosystem health and a human-scale economy?

Bernardo Aguilar, Director of Fundación Neotrópica, one of Osa Conservation’s partner organizations, recently wrote of these concerns in an opinion piece: “What effect would this precedent have on the tourism model and the wellbeing of the area’s communities, given the experience this country has had with other such large-scale projects? Does it make sense to assume the risk of this type of project in such a fragile area[?]”

Here at Osa Conservation, our vision is of a Peninsula where human communities thrive precisely because the ecosystems around them are thriving too. Making this vision a reality will require many more conversations like the ones happening at these Forums.

Next time, we’ll bring a cushion.