03 Jun Bananas: The Spotty Past and Precarious Future of the World’s Most Consumed Fruit

Posted at 04:00h in Uncategorized by Intern Osa Conservation 0 Comments

The banana is one of the most popular fruits in the world. However, since each banana is genetically identical it is highly susceptible to disease. The Osa Verde Farm is able to combat such disease by planting genetically diverse bananas, not using chemical inputs, and maintaining other sustainable practices.

The banana. A fruit that we have grown to love, rely on, and ultimately take for granted may be in danger of going extinct.  A seemingly incurable fungus called the Panama Disease is rapidly spreading to plantations around the world and wiping out the banana crops there.

Despite the fact that there are thousands of varieties of banana worldwide, more than 95% of the bananas produced for export and over 40% of bananas total are the Cavendish variety.  The Cavendish is the variety that we are all familiar with.  This variety is tailor-made for export.  Not only is it mildly sweet, soft, and seedless, but it also continues to ripen after being harvested and has a thick skin that makes it both cheap and easy for companies to transport.  However, in order for the Cavendish to remain consistently viable for export, each is a clone.  This means that there is absolutely zero genetic diversity within the beloved Cavendish.  Additionally, strict monocrop agricultural techniques and lack of crop rotation make the Cavendish extremely vulnerable to threats such as the Panama Disease and pests.  Genetic diversity within a species is usually nature’s defense system against these type of threats, as it allows the organism to adapt to new and changing threats. However, with human intervention and domestication, that first line of defense no longer exists.

Because the Panama Disease is a fungus, it stays in the soil and infects the plant through its roots.  Because each banana plant is biologically 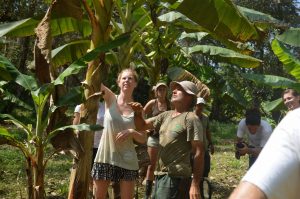 identical, the plant itself is defenseless.  The Panama Disease has the ability, and often succeeds, in wiping out entire plantations.  Then, the fungus stays in the soil for years after, making it difficult to plant a new crop.  Additionally, there are multiple variations of the Panama Disease spreading around banana-producing countries. One such strain is called Tropical Race 4, or TR4.  Panama Disease and TR4 are currently most prolific in South Asia, the Middle East, Africa, and Australia; but it’s spreading.  Randy Ploetz, Professor of Plant Pathology at the University of Florida has called it the “worst threat to sustainable banana production worldwide” and noted numerous social and economic implications in the collapse of the banana industry.

Believe it or not, this is not the first time that the world has seen such a pressing threat to its favorite variety of banana.  The Gros Michel is the sweeter, more-easily transported equivalent of the Cavendish and it practically went extinct in the 1960s when a fungus similar to the Panama Disease attacked it as well.  In fact, the Cavendish is a hybrid banana, bred for its fruit and immunity to the fungus that plagued the Gros Michel.

Why is history repeating itself?  While the fungus has, over time, continued to evolve and change, the Cavendish has remained genetically exactly the same.  In effect, the Panama Disease and the banana are playing an evolutionary game of “Tag”—and the Cavendish is “it”!  In order to keep the Cavendish alive, banana companies have to use a huge amount of chemicals including pesticides, herbicides, and fungicides to keep threats at bay.  Ultimately, there is a limit on the effectiveness of even the most toxic chemicals– not to mention the detrimental  impact of the chemicals themselves on both those consuming the bananas and the environment around the plantations.

Banana companies have a long and dark history of exploitation and big business around the world and especially in Costa Rica.  Despite the fact that Americans annually consume more bananas than apples and oranges combined, there are surprisingly few regulations governing human rights issues in banana production.  Historically, the industry is notorious for its use of child labor, anti-union measures, substandard pay for workers, and exposure of workers to harmful chemicals.

In response to the big banana businesses, smaller-scale companies have cropped up; making the commitment to use 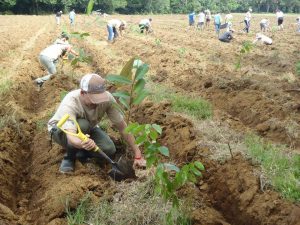 fewer chemicals, treat workers fairly, and protect biodiversity.  Osa Conservation is doing just that! On the Osa Verde farm, we are committed to mastering the art of sustainable farming and teaching it to others.  Rather than grow the now-popular variety of Cavendish, our team is growing the previous favorite, Gros Michel without chemical inputs.

If the Gros Michel is also susceptible to fungal infections, how is it growing in the Osa? And with no chemicals?  The small-scale agricultural practices that are utilized at Osa Verde allow our talented agronomist, Paola Vargas, to focus her attention on keeping the plants healthy.  According to Paola, preventing too much moisture and removing old leaves are some simple yet labor-intensive things that keep the bananas safe and the farm running without the input of chemicals.  Osa Verde is committed to maintaining the farm organically — and according to Paola, it’s not as difficult as it seems.  As long as the plants get the proper nutrients, then the farm is stable. The farm requires constant maintenance, but no more than an industrial farm working with a delicate balance of toxic chemicals.

Osa Verde has a group of 4-8 people that are responsible for all of the work on the farm including planting, harvesting, maintenance, and any other tasks that may arise.  The work being done here has huge implications for the future of sustainable agriculture.  The Osa Conservation team works in the hopes that people around the world can learn to make more sustainable choices when it comes to responsible food production, healthy food, and food security around the world.