Posted at 15:05h in Uncategorized by Osa Conservation 0 Comments 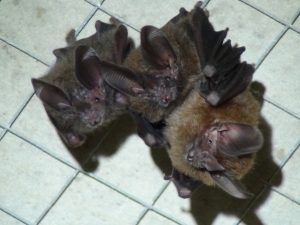 We have all heard about the different ways of attracting birds to our backyard. For example, people hang ripe bananas, provide plants with colorful flowers that are visited by hummingbirds, or place feeders with seeds. However, few people know how to attract bats into their backyards, and fewer yet would wish to given their bad reputation as blood-sucking elusive creatures. Osa Conservation, together with Fundación Universidad de Golfito, is using bat boxes to lure fruit-eating bats into areas that are in need of rapid forest regeneration.

Fruit-eating bats are one of the most important seed dispersers in the tropics. Their fruit consumption increases dispersal distance from parent plants, seed germination, and seed survival. They disperse keystone species, and help maintain forest diversity because of their diverse diet. In addition, bats aid in forest regeneration because many of their food plants are pioneer species, and bats deposit their seeds in highly disturbed areas where other frugivores rarely venture. Therefore, a healthy frugivore bat community is important for successful forest regeneration and the maintenance of diverse plant communities.

However, bats loose essential roost trees by deforestation. Also, bats are often regarded as pests and their roosts are destroyed, which affects bat distribution with concomitant effects on seed dispersal. Artificial bat roosts have been suggested as an effective tool for facilitating bat colonization of deforested areas, thus supporting seed dispersal and potentially accelerating reforestation.

To attract fruit-eating bats, we built 32 bat boxes that were placed in three different sectors of Osa Conservation’s properties. After almost 10 months, more than half of the boxes have been colonized by bats. We are mainly interested in attracting fruit-eating bats that could provide an important source of seed input, but other species have arrived as well. These include the common (Micronycteris microtis) and the hairy big-eared bats (Micronycteris hirsuta), which eat insects and are important for keeping insect pests at bay; a nectar and fruit-eating bat of the genus Glossophaga; and a short-tailed fruit bat of the genus Carollia. At the moment, the most abundant bats at the boxes are insectivorous, but we have observed a steady increase in the abundance of fruit-eating bats, and accumulation of seeds at the base of the boxes.

Overall, our project has been very successful. We have had excellent colonization rates of bat boxes, which in most other regions of the world tend to be much lower. Some of the boxes have been permanently colonized by large groups of bats, and although these are mainly insect-eating, they still serve an important ecological role in tropical forests. We will continue to monitor the boxes for at least one more year, and hope that at the end we can convince other organizations and landowners to consider using artificial bat boxes to aid their forest regeneration efforts.