Posted at 14:50h in Birds by projects 3 Comments

For those of you who may remember, I posted a feature on the Riverside Wren (Thryothorus semibadius) back in April.  It was one of my first postings for the then new Friends of the Osa’s blog The Osa Chronicles and a few of you commented on both the nature history and photography by Gianfranco Gomez.

One of the species ecological behaviors I wrote about was of reproduction and nesting.  When I spoke about the nest of the Riverside Wren this is what I said:  “Nests are bulky globe structures with a roof and a vestibule (so to speak) not only used for raising young but also for sleeping at night any time of the year by either one individual or as many as possibly 3.  This species can be found nesting from December to August, nine months out of the year!”

Not long after this posting some friends and residents of the Osa Peninsula Jim Tamarack & Cheryl Chip saw the posting and sent me this photo they took of a Riverside Wren roosting in its nest at night near their home.  This photograph was taken in the month of December, but it also could have been taken any time of the year. 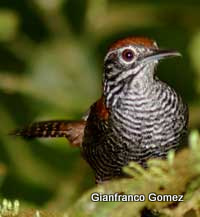 Now, the position of this bird has had many of us puzzled for some time so I am inviting commentary from you all.  It looks like the bird is camouflaging itself in the nest, but how?  The Riverside Wren has barred black-and-white stripes only on the breast and belly while the back is solid rufous.   It’s as if it were laying on its back.  Are there two birds here?  Is this the Riverside Wren?

OK birders, its time to chime in.  I am waiting for your opinions and comments.