Posted at 20:31h in Uncategorized by projects 0 Comments 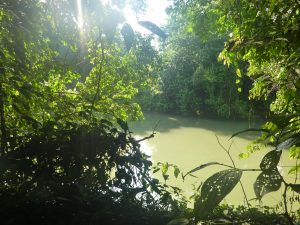 Imagine yourself walking through old growth tropical lowland rainforest in the very early morning hours just before the sun begins to rise.  Here you find yourself surrounded by cool morning air, a cacophony of wildlife and the dawn chorus of literally hundreds of birds.  This particular lowland rainforest is one that meets the Rio Esquinas which flows out into the Golfo Dulce and cuts through Piedras Blancas National Park and Lomas de Sierpe.  These two areas are extremely important protected areas that form part of a biological corridor that connects to the Térraba-Sierpe National Wetlands.  This particular lowland rainforest on the Lomas side, which is owned and protected by Osa Conservation, has a touch of riparian mixed palms, a diverse array of mixed rainforest tree species, large old growth snags, lianas, heliconias and a highly complex vegetative structure typical for primary and old growth forests.  This is the Sendero de Las Aves!

Now, again, imagine yourself walking through this forest on a clear summer morning and you become aware of some particularly interesting birds and their behavior.  First you hear the almost eerie and ghostlike song of the Baird’s Trogon high in the canopy off in the distance.   Next you walk into several Long-billed Hermits from the hummingbird family rushing around in a flurry of courtship activity.  You then hear the double knock of a pair of Pale-billed Woodpeckers and look up to see that they are excavating a nest in a tall large girth snag while just below them there are three Golden-naped Woodpeckers, a regional endemic species to Costa Rica and Panama, also highly occupied with a nest.

You continue to meander through this rich diverse environment and you hear several Red-capped Manakins singing and you look up and see five females all together in the same tree.   It is the females along with males engaged in a bit of courtship display of their own.  This is a manakin lek!  In this scenario the colorful males are doing a very dancelike display on open branches all to attract a breeding female.  She is there on the sidelines to pick the most attractive male (and best dancer) of her choice.

Now finally as you are engaged in watching these manakins dance you begin to hear a mixed species foraging flock moving down the mountain towards you and then another flock approaching from the other direction.  There are really no words to describe what it is like to have upwards of 50 species, not to mention the large number of birds in the manakin lek, and hundreds of individuals (from Becards to Caciques and Antbirds to Orioles) from the top of the canopy down to the ground hunting for insects and foraging for fruit while travelling together within each flock.  This is nothing short of amazing

This was my day in early March of this year 2013 as I sampled birds along point transects for Osa Conservation’s Avian Monitoring Program.  Every year birds are sampled during the breeding season for resident birds and the overwintering period for Neotropical migrants in and around Piro Research Center, The Greg Gund Conservation Center on the Osa Peninsula, and Lomas de Sierpe located on the northeastern end of the Golfo Ducle.

Monitoring began in 2010 to establish a baseline of bird species present on these properties and to sample birds in subsequent years to begin to estimate densities and abundance of target species and determine avian community composition especially in managed areas undergoing various restoration regimes.  A particular focus is placed on neotropical migratory birds considered to be of conservation concern in their northern breeding territories such as the Golden-winged Warbler and Prothonotary Warbler, as well as Osa Peninsula resident birds in need of conservation attention such as the Baird’s Trogon and the Black-cheeked Ant-Tanager which are known to occur in these areas.  Stratified by habitat type and elevation we can determine certain habitats, vegetation types and abiotic factors that are associated with these species to better understand their ecology as well as their conservation needs to develop strategies for their protection.

Solid baseline data has been established and results are beginning to reveal distinct diverse avian communities and species specific densities in habitats that vary from early successional growth of ferns and shrubs, hardwood plantations, older secondary growth and primary forest at each Osa Conservation location.  Results of long term monitoring will assist conservation specialists and managers to develop ways to track sensitive species and protect the habitats they most depend on.

For more information go to www.osaconservation.org or contact [email protected]