Posted at 23:10h in Birds by Intern Osa Conservation 0 Comments

When I first arrived in the Osa for my birding experience, the tremendous diversity of birds astounded me. I seemed to spot a new species each time I walk into the forest around Osa Conservation’s biological station.  Even at the station itself, I saw such birds as the Fiery-billed Aracari, an endemic species in both Panama and Costa Rica. The species diversity stems, in large part, from the selective pressure insectivorous birds put on their prey. This causes insects to adapt in order to evade their avian predators. In turn, the bird predators must specialize alongside their prey to catch the insects. 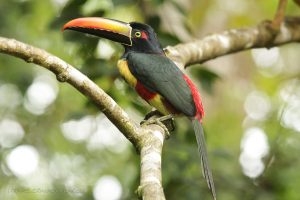 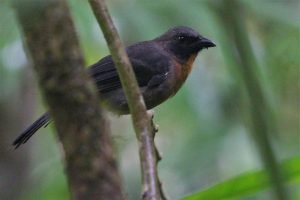 I also studied Manakin distribution around Osa Conservation by birding the surrounding trails and recording their presence in a GPS. I was thrilled to find 21 unique locations and view at least 5 leks. A lek is when birds perform elaborate mating displays. Red-capped Manakins tended to be concentrated in primary forest either near the border of secondary forest or in a clearing from tree falls, which create patches of secondary growth. 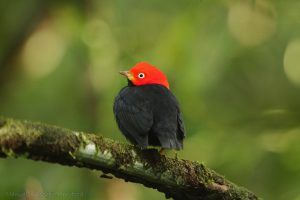 Another highlight from my time here was helping to conduct point counts of birds in areas that will be reforested with different concentrations of the fast-growing balsa tree, an experiment that tests the efficacy of this idea for reforestation. Learning the methodology for conducting point counts, as well as understanding the reason for using them in grasslands, fascinated me. These counts reflected the Osa’s enormous avian diversity, and I am glad that I contributed to such an important project that could help the birds that I am so passionate about.

Birding in the Osa was a unique experience that allowed me to learn about and contribute to avian diversity.