Posted at 16:51h in Science and Research by Osa Conservation 0 Comments

It’s always hard to leave a home and leaving Osa Conservation was no exception. Though I lived there for only two months (a relatively short time in the grand scheme of things), I built a family among Osa’s team and became deeply attached to the dense jungle and expansive beaches that make up the peninsula. 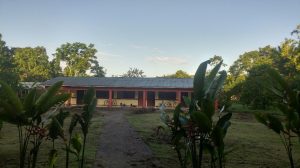 The little cabin Reyna lived on the farm at Piro. Photo: Reyna Schedler.

At Osa I learned that love looks like bringing a hand-picked papaya up the river or on the trails to share on a blazing hot afternoon or spending all day in the field in the pouring rain to help a fellow researcher gather data. I learned that magic exists within early morning sunsets while walking miles and miles on sand to patrol turtle nesting sites and it exists within glimpses of the milky way through the jungle canopy from the bed of a truck late at night. I learned that family can be created when people simply open their arms to each other, and through a shared passion of working hours upon hours, to save the species and the environments that are just as much a part of this planet as we are. I learned that every species of plant and animal has an equally important part to play within an ecosystem, from the sexy jaguar and flashy iridescent hummingbird, to the leaf cutter ant and endemic Balsa tree. I learned that I love afternoon rain showers that drench you to your core but make a music that will forever play in my heart. I learned that I never want to wear shoes again and that I will never know the source of every sound and smell deep in the jungle. Above all, I learned just how adaptable one must be in conservation work and that every day is a new adventure. 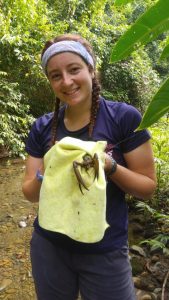 Giant freshwater shrimp (Macrobrachium americanum) capture to be measured and marked as part of the research study. Photo by Anna Moragne.

I came to Osa Conservation looking for scientific research and field-work experience and left with so much more. I was an intern for the program of “Rios Saludables” so I helped with a variety of things, from carrying out field research and analyzing data to helping plan a bioremediation festival and working on social media campaigns. The incredibly special part of being an intern with this program was that I was given the freedom to work almost entirely independently on the research we were doing. I was given space to contribute fully to our research project and felt that I played a valuable part in the collaborative efforts to develop this research. This taught me skills in communication and organization as well as flexibility and adaptability in the field. Though I came with experience hiking long distances up rivers to gather data, I had never worked with giant freshwater shrimp before, and yet with one day in the field handling them by myself I learned (through a bit of trial and error) how to capture, measure, and mark them efficiently. When a trap broke in the field many kilometers from the station, I had to come up with a quick fix so I could continue the study. And, when a dramatic rainy-season storm washed half our traps away, I was able to develop a new data collection schedule and put my efforts towards other projects. I learned how to effectively work with landowners to establish community connections and spread conservation efforts, developed new skills in video editing, and fine-tuned organizational skills by helping to plan a festival to bioremediate a polluted river in an area being reforested. 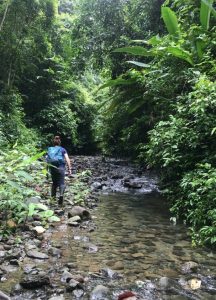 Hiking up the Piro River to check shrimps traps as part of the mark and recapture study of Macrobrachium americanum. Photo: Anna Moragne.

Through this internship it became obvious that countries around the world, especially the United States, can learn so much from the Costa Rican reforestation and conservation efforts. As I leave this beautiful country, I am sorry to say goodbye, but I am also so excited to share with my conservation communities at home in the U.S. these impressive ways of involving communities in environmental restoration and inciting widespread passion for protecting this earth. Osa Conservation is a powerful example of the success that comes from creating worldwide connections between people and organizations from all sorts of backgrounds and nationalities. I’m beyond proud to have been a part of this team. I know this is not goodbye, but simply a see you later. May our paths cross again as we all continue to use our passions to protect this inspiring place we live in. 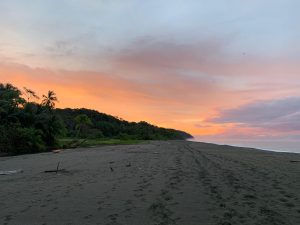 Sunrise on Piro beach at the start of an early morning patrol with the turtle team. Photo: Diego Argueta.