Posted at 09:36h in Uncategorized by InternUser Osa Conservation 0 Comments

When I left England on a cold, dark morning in June I had absolutely no idea what to expect when I touched down in Costa Rica. I knew there was rainforest, but I didn’t really know what that was, and I knew I was going to do sea turtle conservation, but I had never done anything like it before. Now, back in England and reminiscing on my experience, I can say whole-heartedly that it was the best thing I have ever done. 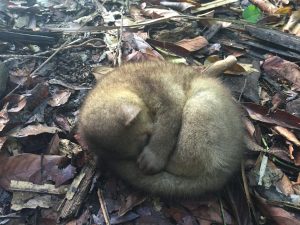 I spent one glorious month at Estaciόn Piro on the Osa Peninsula. The surrounding rainforest is one of the most awe-inspiring places I have ever been. I saw two nesting Olive Ridley turtles, Coatis, Agoutis, countless birds, reptiles and insects and even a juvenile Cayman! But there is a special place reserved in my heart for Fleur, the baby Kinkajou.

Charlie and I were walking back from a morning patrol on Pejeperro beach when we were stopped in our tracks by a tiny ball of fur curled up in the middle of the trail. At first we were startled, not knowing what it was, thinking it was going to run off at any moment, but she was completely oblivious to us. We checked to see if she was breathing, she was. We tried making a few little noises to see if she would get up and move away as we thought she might be hurt, but she would not be disturbed from her sleep. They are nocturnal after all! There was nothing Charlie and I could do for her on our own so we dragged ourselves away and headed back to base for a well-earned breakfast.

We returned a few hours later with Manuel, the animal whisperer, to rescue her if she was still there. It was about 10 am so the chances of her mother coming back in the midday heat were next to none and the chances of her dying of dehydration, exposure or getting eaten by a bird, cat, or even ants, were very high. So we scooped her up and took her back to the station. 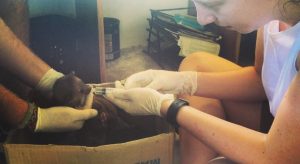 Kinkajous have a long tongue so they can feed off the nectar in plants. We started by trying to feed her a little sugary water but that didn’t go down too well so we gave her goats’ milk instead, which  she liked. She was very relaxed and animated. She stretched out and scratched her belly. They have the most amazing hands and feet, like humans but with big claws for gripping the branches. And she chewed her tail, like a child when it’s teething. I think she was too young to know fear because she was not nervous around us at all. 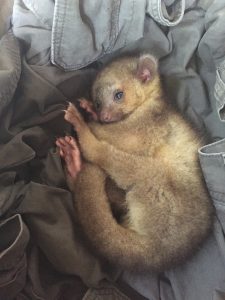 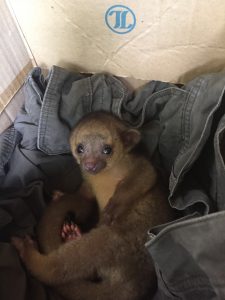 Our plan was to take her to a sanctuary that afternoon but alas the unpredictability of life in the jungle was no different that day so we nursed her overnight. She was so little and it was a cool and very wet night, so I got up to check on her and feed her twice. Once at midnight and again at about 3.30am when she started making a bit of a racket, a high pitched squeaking sound to be precise.

We took her to the Sanctuary the next day. She was strong and healthy, a spunky little survivor, and I am confident that they will be able to rehabilitate her back into the wild. I had many amazing experiences in Costa Rica but I will treasure my time with Fleur the most. 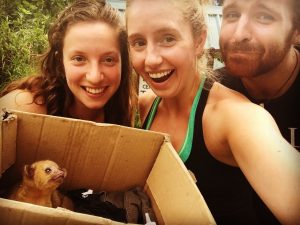