Posted at 15:09h in Sea Turtles, Volunteers and Visitors by Renee McKeon 0 Comments

We just wrapped up the peak sea turtle season here in Osa and are proud to announce that this year we released over 20,000 baby sea turtles! The hatchlings were from nests relocated to our hatchery because they were vulnerable to predation or to the whims of the river that runs along and often through the beach OC monitors. Since these nests were likely to have been lost altogether, our hard working volunteers and staff have given 20,000 more sea turtles a chance to make it in this world. A huge thanks to everyone who visited and lent a hand this year on the Osa Conservation Sea Turtle Conservation Program.

In this weeks blog, we hear from a long-term research assistant about his surprise discovery one morning at the sea turtle hatchery. 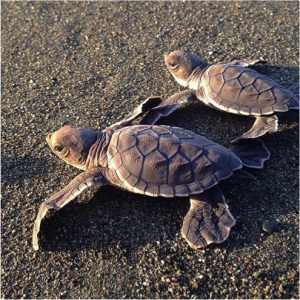 In the early hours of the 2nd November 2015 a clutch of 82 Green Turtle (Chelonia mydas) eggs were laid by a female on Piro Beach. This would be the first Green turtle nest to be relocated to the hatchery this year. The overwhelming anticipation to witness the first green turtle hatchlings was endured for 63 days until the joyful day arrived on the 4th January 2016.

My name is Charles Wheeler and I am one of the research assistants for the Sea Turtle Programme at Osa Conservation. I was scheduled for the morning patrol on this day and was expecting a normal routine patrol on the beach with the possibility to release some Olive Ridley (Lepidochelys olivacea) hatchlings, the most abundant species of turtle eggs within the hatchery. After patrolling the beach and recording three new Green turtle nests, I arrived at the hatchery. I open the door to find some escaped hatchlings crawling around, at first I noticed something different about the hatchlings they were larger and had white bellies. After a few seconds of confusion I realised these were in fact the green turtles and they had hatched seven days early. Unable to control my excitement like a small child on Christmas morning, I hurried around the hatchery collecting all the hatchlings and placing them into buckets. There were a total of 50 Green turtles as well as 70 Olive Ridley hatchlings that had emerged over night. 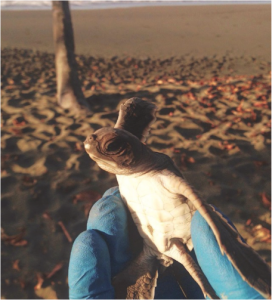 Knowing that this was a rare opportunity to release fifty green babies I couldn’t just stay and liberate them myself. So I left the turtles safely secured inside the hatchery and ran from the beach back to the station 1.6km away to tell everyone else the great news! Being able to watch the liberation of these two endangered species gives immense job satisfaction and I am proud to be a part of this conservation programme protecting these international species.

You may have seen Charles on our Facebook page recently when we shared a selfie he couldn’t resist snapping after coming across a rebellious sea turtles that decided to nest during the day, breaking all the rules. If not, check it out at this link and like our page to follow us.