Posted at 11:12h in Land Conservation and Forest Restoration by projects 3 Comments 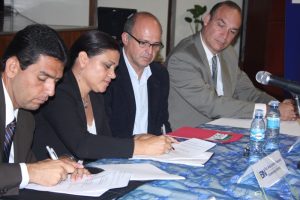 In a historic moment for conservation in Costa Rica, Osa Conservation (OC) and Conservation International (CI) signed the world’s first public-private Biodiversity Trust Fund in San Jose, Costa Rica on August 8TH.  Both OC and CI each contributed $500,000 to the Fund, which was matched with a $1 million contribution from the Costa Rican government through FONAFIFO, establishing an initial Trust Fund of $2 million to protect private lands in the Osa Peninsula, where Osa Conservation works.  The Biodiversity Fund has matching commitments from the German Cooperation Agency (KFI) and the World Bank, with the goal of increasing the Fund to $25 million in five years.  This national fund serves as a model for collaboration between governments, private organizations and citizens working together to protect lands that have a high level of biodiversity under threat of disappearing.

Most public protected area systems around the world are too small or isolated to functionally sustain broader ecosystems.  Typically, protected areas lose large predators first, setting off a series of cascading ecological effects that degrades the ecosystem. The linking of national parks, reserves and private protected areas is integral to the creation of biological corridors that can mitigate this effect.  In recognition of this, in 1996 Costa Rica created FONAFIFO, the National Forestry Financing Fund, to support public-private partnerships for forest conservation. Each year, FONAFIFO provides financial incentives to private land owners who maintain their forests through the well-known payments for environmental services program.

However, FONAFIFO identified the need for an addition to this system—a maintenance compensation scheme that will provide financing to permanently endow the long term protection of private lands, significantly adding to the conservation value of public lands, such as Osa’s Corcovado and Piedras Blancas National Parks.  OC’s new Executive Director, Manuel Ramirez, was directly involved in the establishment of the fund.

It is our hope that this trust will continue to be expanded for the benefit of all of the biological wealth in the Osa Peninsula!