14 Aug Environmental Festivals in the Osa

In early June, we had three important celebrations: World Environment Day, the 2nd anniversary of the Jorge Poveda Álvarez Arboretum and the inauguration of the Centenary Forest.

World Environment Day was celebrated in early June, and had participation from diverse groups of people. We had students from various educational centers participate as well as people from organizations and businesses with various fields of focus, like mangroves in the case of Fundación Neotrópica, sea turtles in the case of LAST (Latin American Sea Turtles) and sustainable forest plantations in the case of LACT. The support and participation of local farmers and artisans with the exhibition and sale of their products topped off a great turnout. 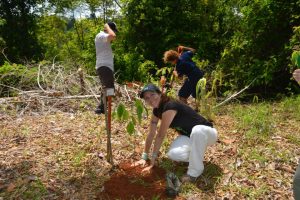 ear we celebrated two important events in forest culture. First, the second anniversary of the Luis Jorge Poveda Álvarez Arboretum was on June 14. This museum of trees on the Osa Peninsula includes emblematic and threatened species like the ajo negro (Anthodiscus chocoensis), the camíbar (Copaifera aromatica), the nazareno or purpleheart (Peltogyne purpurea Pittier), the cristóbal (Platymiscium pinnatum) and the breadnut or Maya nut (Brosimum alicastrum).

Lastly, on June 15 was the inauguration of the Centenary Forest. This day pays homage to the 100 years of the institutionalization of National Tree Day by President Alfredo González Flores, and also to honor the people and institutions that have worked toward the conservation of the forests like Don Álvaro Ugalde, Daniel Janzen and Winnie Hallwach. This has been and initiative of the Golfo Dulce Forest Reserve, as a strategy to promote forest culture in the communities of the Osa and to promote an appreciation for the forests and their ecosystem services.

Celebrations like these are crucial to community outreach, especially to the younger generations. By celebrating how far we’ve come and our accomplishments in conservation, we get people excited about nature and inspire more action to protect it in the future!