Posted at 10:28h in Birds by projects 0 Comments 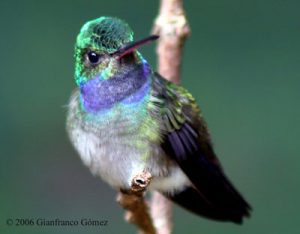 Also known as the Beryl-crowned Hummingbird the Charming Hummingbird (Amazilia decora) is regionally endemic to the Southern Pacific lowlands and coastal areas of Costa Rica north to Carara and Panama.  It is sometimes considered conspecific with the Blue-chested Hummingbird found on the Caribbean slope as they are nearly identical.  You will often see them in coffee plantations, gardens, forest edges and along streams and open clearings feeding on Inga, Hamelia, Satryia and Heliconia.  Like many tropical species Charming Hummingbirds form courtship assemblies or “leks” of up to 12 males where males gather to advertise their courtship display and land themselves a female breeding partner.  Interestingly, males and females that defend territories at flowers such as the Charming Hummingbird are those hummingbird species that are brightly colored to show off their iridescent costumes in contrast to the flowers.  Hermits do not hold territories in the same way and are not generally very colorful in comparison.  More on hermits though another week.  Charming Hummingbirds will breed throughout most of the year expect for the height of the dry season.

Listen to the Charming Hummingbird call :

We would like to thank Gianfranco Gomez from the Drake Bay Rainforest Chalet http://www.drakebayholiday.com or http://www.thenighttour.com for their stunning photographs and allowing us to showcase them.  You can find them just up the Pacific coast from us in Drake Bay, Costa Rica.

We also want to thank the Osa Recording Project headed by Jeff Woodman which enables us to bring you these sounds.  We will keep you posted on the progress of this tremendous undertaking and when our CD will be available.