Posted at 10:59h in Birds by projects 0 Comments 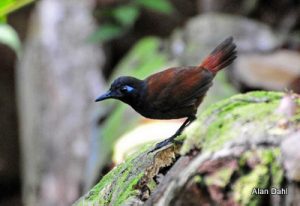 Chestnut-backed Antbirds (Myrmeciza exsul) are common residents of the Osa Peninsula and one of the most abundant species found here.  It is difficult to walk outside here at Friends of the Osa’s Osa Biodiversity Center and not hear two or three individuals counter-singing.  Often times when the rest of the forest has become fairly quiet you can always count on a Chestnut-backed Antbird to let you know that all is as it should be.

The signature look of three species of Antbird found on the Osa Peninsula of Costa Rica is the blue orbital skin (the skin surrounding the eye).  The Chestnut-backed Antbird is one of these species and is distinguished from the others by its slate colored head and chestnut back.  The other antbird that you are likely to see here with the blue orbital skin is the Bicolored Antbird, but it is distinguished by its white neck and belly.

As you can tell by the name, Chestnut-backed Antbirds follow army ant swarms; however, they only do this occasionally and are not considered obligate, or professional, army ant followers.  They are strongly associated with the dark undergrowth of wet tropical forests within dense vegetation especially near overgrown treefalls or dense thickets.  They often join mixed species flocks but won’t necessarily move along the forest with the flock, but will rather join them while ant swarms are moving through the dense thickets in which the Chestnut-backed Antbirds are found.  Once the army ant swarm or the mixed species flock is gone, they will remain in the undergrowth found in their territory.  Many tropical birds follow army ant swarms to pick up insects flushed by the ants, not to eat the ants themselves.  Chestnut-backed Antbirds mainly hop along very low lying perches or along the ground and peck their prey, which mainly consists of insects and spiders from the ground or near the ground vegetation. 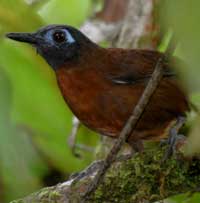 They are territorial throughout the entire year and both the male and female sing duets back and forth to each other and in response to their nearest neighbors.  When disturbed, they will pump their tail downward, droop their wings, and fluff up their feathers.  They nest low in small bushes or debris during the rainy season from April to October.  They usually lay two eggs and both parents incubate and tend to their young.

We would like to thank both Alan Dahl from Focused on Nature and Gianfranco Gomez from the Drake Bay Rainforest Chalet for allowing us to showcase their photographs.