Posted at 08:00h in Birds by projects 0 Comments

The Pale-billed is distinguished from the Lineated by its fully red head.  Only the female, pictured here, has a black center crown, neck and throat while the male’s head is completely red.  When their bright red crest stands up on end they look like the punk hoodlums of the bird world.

These birds are actually quite common here on the Osa and can be found right here at the Osa Biodiversity Center anywhere between the Greg Gund Conservation Center and Piro Research Center.  There is a pair that is excavating a nest right now in the month of September in our NRDC forest restoration plot located approximately 6 meters up in a snag. 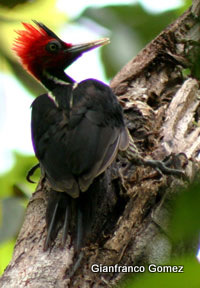 The nesting period typically ranges from August to December.  Pale-billed Woodpeckers excavate their own nests, but are sometimes taken over by Araçaris while under construction.  Both parents incubate the two eggs typically layed and also care for their young.  They roost in large cavities similar to those used for nests and can use the same cavity for roosting for several months.

They commonly eat the large larvae of wood boring beetles excavated from the trunks and limbs of large trees and dead and decaying wood.  When not eating beetle larvae they have been known to take fruit from Melastome trees.

Sounds include the vocal “bleating” sound and the non-vocal drumming “double-rap” similar to that of other Campephilus species such as the Ivory-billed Woodpecker.  The NRDC pair is in the habit at the moment of counter-rapping with its nearest neighbor who is only about 100 meters away.

We would like to thank Alan Dahl from Focused on Nature photography and Gianfranco Gomez from the Drake Bay Rainforest Chalet for allowing us to show off their amazing photographs of the Pale-billed Woodpecker.