Posted at 11:43h in Birds by projects 0 Comments 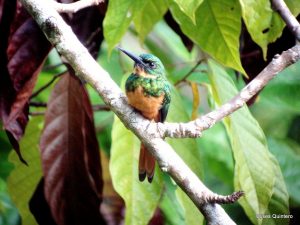 Some might say that the Rufous-tailed Jacamar (Galbula ruficacauda) is reminiscent of a Green-and-Rufous Kingfisher for its similar color patterns and heavy bill whereas others might see this bird and think of it as an oversized hummingbird.   Whatever side you fall on it’s a species that you can’t seem to get enough of and is hard to turn away from for its brilliant colors and sassy attitude.

There are 15 species of jacamar in Tropical America which belong in their own family Galbulidae situated between the puffbirds and toucans.  All belong to the order Piciformes along with woodpeckers and honeyguides.  There are two species found here in Costa Rica, the Great Jacamar (Jacamerops aurea) found on the Caribbean slope and the Rufous-tailed Jacamar found at low elevations on both Caribbean and Pacific slopes.  They are fairly common here on the Osa Peninsula mainly found along forest edges, streams and the open understory of tall second growth forests.  It is also known to frequent cocoa plantations.  We recently saw one perched along a road near one of our avian monitoring points on Friends of the Osa property in an area that we know as Arbolito.  It is not as abundant as some species and so it is a special moment to come across one. 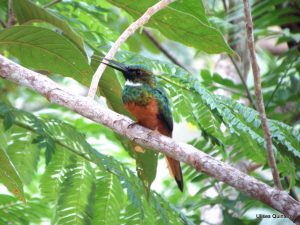 They measure in at about 9 inches (23 cm) long and weight approximately 27 g.  Those long bills are used for capturing insects.  They perch on horizontal branches swaying their bill back and forth in search of flying insects.  They are known to capture bees and beetles as well as large brilliantly colored butterflies such as Morpho and swallowtails.  Their long beak allows them to grab hold of butterfly bodies while keeping flapping wings as well as bee stings at bay.

Rufous-tailed Jacamars dig long burrows (11-20”) in a bank, the root mass of an upturned tree or a termitary in which to put their nest.  Parents feed their 2 – 4 young during a 3 week nestling period by regurgitating insect parts.  By the time the nestlings are ready to fledge the nest can look like a tomb of glittery insect wings and chitinous body parts.