Posted at 10:52h in Birds by projects 0 Comments 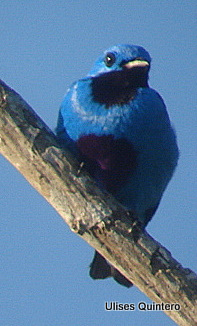 This week as promised I am bringing you the Turquoise Cotinga (Cotinga ridgwayi).  This is definitely one of those species of bird that makes you go “WOW” when you see it.  This is also one of Costa Rica’s most sensitive species to loss of forest habitat.  BirdLife International has this Cotinga species listed as Vulnerable which puts it one step away from be considered Endangered.  It is a regional endemic only found on the Pacific slope of central and southern Costa Rica and western Panama.  Its population is estimated to be between 2,500 – 10,000 birds and declining.

So why the decline?  As with many species, the Turquoise Cotinga is faced with deforestation and severe habitat fragmentation.  This coupled with an already naturally small range makes it difficult for the Cotinga population to remain stable.  This is also true for its closest relative the Yellow-billed Cotinga also found here on the Osa Peninsula whose population is estimated to be much smaller between 250 – 1,000 birds (more on this species in the weeks to come!).

Because of the Turquoise Cotinga’s conservation concern and its rarity, it is a special occasion when we see one.  Now you must know there are certain areas on the Osa Peninsula where this bird is quite common such as Carate and Corcovado National Park and folks flock to these areas to see them.  Since we at Friends of the Osa are in the middle of our seasonal avian monitoring we have had the distinct pleasure to have encountered several Turquoise Cotingas in the last two weeks within our monitoring points and just up the road from the Greg Gund Conservation Center on Cerro Osa.  It is possible that Turquoise Cotingas are more common than once thought on Friends of the Osa property especially outside of the breeding season when they are seasonally migrating in search of food resources.

This passerine species is found mainly in the canopy of humid rainforest and secondary growth and can also be seen along forest edges and in tall trees within shade grown coffee plantations.  They will wander throughout the canopy of wet forests and are known to rest on high exposed perches.  They consume the fruits of fig trees, Cecropia and parasitic mistletoe Psittacanthus and will go down low to gather pokeweed berries Phytolacca in clearings on occasion.  In case you were wondering it weighs in at about 50 grams, just under the size of a Red-winged Blackbird.

The males and females apparently do not form pair bonds.  The males gather in group display leks to attract females.  The female then builds the nest and rears the two young all on her own.  Nesting takes place between January and May.

Conservation measures are to investigate current distribution and discourage the conversion of shade coffee to full sun grown coffee.  Unfortunately very little information is available on the behavioral ecology of this species so the more we learn the more we will bring to you.