Posted at 15:45h in Birds by projects 0 Comments 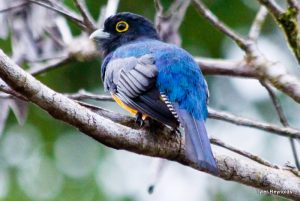 This week’s bird, the Violaceous Trogon (Trogon violaceus) jumped out at me (not literally) as I was having my morning coffee on my front porch here at Friends of the Osa’s Osa Biodiversity Center on Cerro Osa.   I was watching all the typical dawn action, mainly the Tropical Kingbirds and Gray-capped Flycatchers being overly vociferous when I saw another yellow bellied bird perched calmly on a Virola tree branch.  This particular belly though was accompanied by a violet head, a beautiful long black and white barred tail and the distinctive yellow eye ring of the Violaceous Trogon.  The female Violaceous is distinguished from her mate by her gray head and elliptical eye ring.  I have since noticed that this male trogon as of late is always perched on that same branch every morning in its upright posture, not for long, but long enough for me to finish my coffee and get a good look.

There are 40 trogon species in the warm regions of the world, ten of which are found in Costa Rica.  Four species can be found here on the Osa Peninsula: the Black-throated Trogon, the Slaty-tailed Trogon, Baird’s Trogon and the Violaceous Trogon.  You can see all four species here on Friends of the Osa properties.  You just have to look very carefully as they can be somewhat still.

You can find them in wet lowland forest and also along edges and open areas.  They will hover to pluck fruit or insects from the vegetation and are known to eat wasps.  In fact, Violaceous Trogons have been known to nest inside wasp nests, termite nests and arboreal nests of Azteca ants.  Naturalist Alexander Skutch observed a pair actually nesting inside a wasp nest (vespiary).  The Trogons built their own nest inside the vespiary in the early morning hours before the wasps became active.  During the day the Trogons would hunt the wasps taking them from the air or from the surface of the vespiary.  Interestingly, the wasps never drove the Trogons from their nest nor did the Trogons ever eliminate all the wasps, but they did successfully fledge young.

You can find the Violaceous Trogon on either coastal slope of Costa Rica and it ranges from Mexico down through Amazonian Brazil.  And yes, for those of you who may be wondering, the Resplendent Quetzal is also in the Trogon family and found in the Tilaran, Central and Talamanca Cordilleras here in Costa Rica.

Keep an eye out down the road as I will also devote a page to the Baird’s Trogon since it is endemic to Costa Rica and Panama and vulnerable to extinction according to International Union for Conservation of Nature (IUCN).

This week’s photograph was taken here on the Cerro Osa property just today by Friends of the Osa’s Tyler Reynolds.