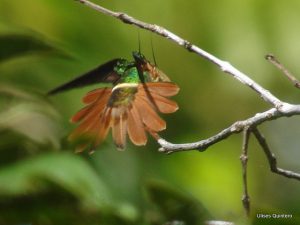 Of all the hummingbird species, the coquette males that are most highly adorned with ornate feathers that are there to likely help in territorial defense and enhance species recognition.  The White-crested Coquette (Lophornis adorabilis) is the only coquette found here on the Osa Peninsula and is regionally endemic to south western Costa Rica and Western Panama.

The male of this species, which is also sometimes called Adorable Coquette, is known for its white crest and long green cheek tufts and may be arguably one of the most sought after birds to see when one visits this region.  They wander through forests high in the canopy and low along forest edges feeding on the nectar of flowering Inga, Vochysia, Stachytarpheta and Lonchocarpus plants and will also take small spiders and insects.  They hover with their tales cocked upward while feeding.

While courting a female the male will make short arcs side to side not much more than about a foot in either direction in front of the female.  He uses his colorful good looks to defend his flowers within his territory and the female takes on all nest duties with no help from the male.  The small lichen covered nest holding two minute white eggs is placed on the fork of a branch along the forest edge or a clearing and is not very well concealed.

They are said to be found from 300 meters up to 1220 meters but we have seen them here at the Piro Research Center which is near sea level as well as up along the Greg Gund Conservation Center’s northern border at Cerro Osa which sits at about 300 meters all within the last month.  At the moment they are engaged in reproductive behavior which takes place during the rainy season from December to February with courtship seen as early as October.   The male will lose his ornate regalia when the breeding season is over.