Posted at 09:00h in Uncategorized by InternUser Osa Conservation 0 Comments

This blog and all photos were provided by:

Steve Ressel|Professor at College of the Atlantic

This past August, I had the good fortune to visit Piro Biological Station for a few days. Piro was one stop on a seven-day scouting trip with another colleague where we explored different areas in the Osa for a future tropical ecology course. My days at Piro BioStation were few in number and mostly filled with logistical considerations associated with bringing students down to the Osa. However, I still left overwhelmed by the amount of biodiversity I saw during my brief, busy stay. I did have one thing in my favor, it was the rainy season and amphibians are my thing; the frogs did not disappoint.

My last day and night at the field station stands out in particular, because of the torrential rain the night before made all of the surrounding forest dripping wet for the next 24 hours . As the rain poured down, Manuel started thinking that it may be enough to prompt another round of explosive breeding in Agalynchis spurrelli (The Gliding Tree Frog) and he suggested that we head out early in the morning to see if that indeed was the case. It wasn’t, but I was blown away by the number of egg masses clinging to vegetation from previous mating bouts. Upon close inspection, I saw that many of the eggs contained well developed, squirming tadpoles.

I am an avid photographer of nature and in the aftermath of the previous night’s storm, I was mesmerized all day long by the intense colors of the forest, which were hyper-saturated by the diffuse sunlight created by lingering cloud cover and a film of water on everything terrestrial. Please take me on my word that the color of these tree buttresses (Tachigali versicolor) and that of this male anole’s dewlap (Norops polylepis) were not enhanced with software.

Back at the dining area at dinnertime, I heard frogs calling at an intensity level that wasn’t evident on the previous nights of my visit. I couldn’t pass up the opportunity to explore with my ears and eyes. So, with some suggested field sites from Manuel and Renee, I set out into the night with my camera and headlamp. The first stop was along the banks of Piro River to look for glass frogs. I heard them calling in the overhead foliage but the 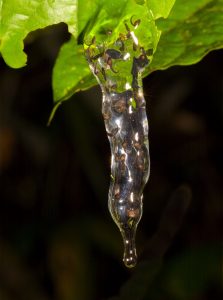 persistent wet conditions did not stimulate them to descend within reach of my camera’s lens. However, I could see that there were numerous egg masses of Cochranella granulosa (Grainy Cochran Frog) that were deposited some time before my arrival. Like The Gliding Tree Frog eggs I saw during the day, many of these masses, like the one pictured below, were “ripe” with very active tadpoles.

Look at those coppery eyes!

There was another species calling alongside S. elaeochroa and I knew it well. It was Dendropsophus ebraccata (The Hourglass Treefrog), that I studied in Panama while in graduate school, and their abundance that night was staggering. My mind flashed back to 1992 when I spent many wet, warm nights studying the biology of this frog because of its impressive capacity for calling. Fast-forward to the present, I was now focusing on the multitude of D. ebraccata around me because they are just so damn photogenic. 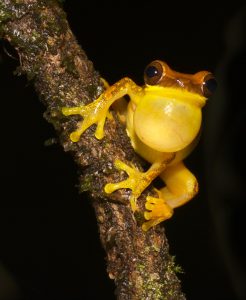 I went to bed that night – or rather, early the next morning – reluctantly because, for the frogs, the night was still young. My hope is that in the near future, I can share these amphibian experiences with students. Although, I must confess that as I drifted off to sleep, I relished the fact that I had the frogs to myself that night.