25 Jun Following Tracks in the Forest

Posted at 13:32h in Uncategorized by Osa Conservation 0 Comments 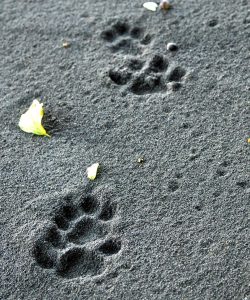 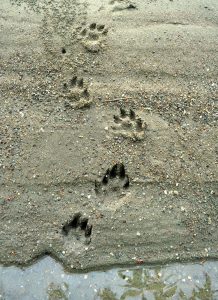 When walking through the rain forest of Osa while appreciating its beauty, one rejoices to see a host of species that live there. It is common to see various birds singing and flying around, ants building highways in the forest, butterflies of different colors and shapes, and even reptiles and amphibians on the move. However, a limited number of mammals can be observed with the naked eye, except for those that are not too shy such as agoutis, squirrels and monkeys swinging in the treetops.

If you are lucky and keep quiet while walking through the forest you can see groups of peccaries, anteaters, armadillos and deer. However, there are some other animals which are very difficult to see because of their elusive nature and such as skunks, tayras, otters and of course wildcats. Despite their unobtrusiveness , mammals are an extremely important and vital element for the functioning of the forest; therefore, their ecological research is essential for any conservation project.

But the fact that we do not spot these animals does not mean, of course, that they are not there, it just means that we cannot see them. Fortunately, when these animals use the forest, they walk through different substrates, including sand, mud and loose soil allowing their footprints to remain marked on the floor, sometimes for several days after they have been there.

For several years, researchers have used the tracks of mammals as a source of information about the ecology and behavior of these species because a properly identified footprint tells us not only the species to which it belongs, but also about the behavior of this animal at the time it went through a particular place, i.e. we can know if the animal was walking, running or jumping, if it was alone or accompanied, how fast it moved and in which direction he was going.

Developing these skills takes time and great effort in the field, and if accomplished, the researcher becomes a real detective on the behavior and ecology of wildlife mammals.
Thanks to the information provided by animal tracks, we have access to valuable knowledge of these species such as presence of these animals in a particular place, how they use their habitat, understanding their relationships with other species, how they behave, and the number of individuals in a herd or group if such is the case.

In addition, this research technique is extremely simple, inexpensive and highly reliable, so track sampling is the most successful technique for monitoring terrestrial mammal populations in the long term. Furthermore, it provides a branch of hints about the natural history of even the most cryptic mammals around without the need for them to be spotted.

So, next time you are in a rainforest pay a little attention to the ground. Look at it, analyze it, investigate it and be amazed by it, because it can tell you lots of stories about the creatures of the forest.