27 May The Geoffrey’s Spider Monkey

Posted at 13:52h in Uncategorized by projects 0 Comments

Written By Manuel Sanchez
Translated and Edited by Florencia Franzini 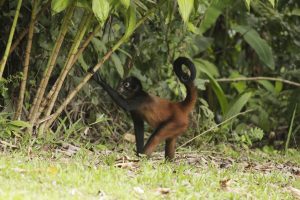 A Spider Monkey Foraging for Food.

The Geoffrey’s Spider Monkey (ateles geoffroyi) that inhabits the Osa Peninsula has a major role in the forests on the peninsula: these charismatic creatures are both crucial for seed dispersal and also double as health indicators for forests. A common day in the life of a spider monkey consists of a family group of 20 to 40 individuals whom separate into smaller groups of 3 to 8 that forage during the day, and then come together once again at night to sleep (safety in numbers!).  It is common for small foraging groups to come across other rival foraging groups instigating small battles – male versus younger male, and female versus female. On many occasions the weaker monkey will try to escape via camouflage, between tree branches, or by retreating to the forest floor becoming immobile and quiet in the process to avoid detection. These actions, though, also have a crucial repercussion; many spider monkeys hiding on the forest floor will later become prey to the feline predators of the Osa, such as the Puma and the Jaguar, adding to the great food web of forest.