Posted at 09:46h in Science and Research by projects 0 Comments

Diseases aren’t supposed to be the first thing you think about when visiting a new place, especially one as beautiful as the Osa. However, when you’re a disease ecologist like my colleague Peter and me, it’s sometimes hard to keep parasites out of your head. Figuratively, that is! So, even before our first trip to Cerro Osa in January 2011, as part of a tropical ecology course with Princeton University, we had begun thinking of ways we could tie in the unique ecology of the Osa with our own research.

Trawling through the wonderfully informative Osa Conservation website, we had eagerly devoured information on the landscape and ecosystem we would be exploring. We found out how Osa Conservation was working to create a biological corridor of rainforest habitat between Cabo Matapalo at one end of the peninsula and Corcovado National Park at the other. That intrigued us. Both of us also have conservation backgrounds, and so we were well aware of the positive benefits of connecting patches of habitat, such as giving predators larger areas to hunt in, and decreasing the chance of inbreeding, which can occur if animals are squished into too small an area. However, we also knew of some theoretical work that our boss, Professor Andy Dobson, had done looking at how corridors, by increasing connectivity between animal populations, might affect disease transmission. Could the Osa peninsula provide us with a natural laboratory for testing some of these ideas?

As soon as we piled out of the dusty taxi at the top of Cerro Osa and took in the spectacular view of the landscape, we knew the answer was yes. Straight away we could see how the proposed Osa Biological Corridor, stretching out before us, would provide a crucial habitat link to the rich jungle fastness of Corcovado. However, looking down toward the Pacific we could also see the thin line of the Carate road following along the edge of the corridor, with large tracts of fields and cattle ranches on either side. While the south-eastern side of Corcovado is bordered mainly by beach and mountains, with some ecolodges in between, the corridor would allow for a long boundary of forest with farmland, increasing the amount of geographic area for potential contact between wild and domestic animals. This greater contact could also lead to more opportunities for disease transmission.

Now, a year and three trips to the Osa later, we are well on our way toward testing this hypothesis. At this point, we are 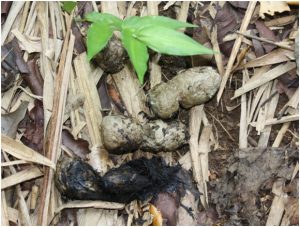 Large puma scat, complete with agouti fur, which we found at one of the eco-lodges near Matapalo in May, 2011 (© Claire Standley)

focusing on parasites, since they are relatively easily detected and non-invasively diagnosed. For example, simply by collecting fecal samples, we can look for a wide variety of intestinal parasites, such as amoebas and worms. Since it’s easier to get samples, so far we have focused on surveying the domestic animals, and specifically the dogs and cats, living at the various farms and lodges between Matapalo and Carate. However, whenever we walk the trails around Piro and Cerro Osa, we always keep an eye on the ground ahead of us; several times now we have been lucky enough to come across an ocelot or puma scat, which we eagerly scoop up! A key objective for our future research plans is to increase the number of scat samples from wild carnivores, and in order to achieve this, we have started working with a number of the lodges in the Matapalo and Carate area. Since the lodges also have trails through their land, which are used for tours, we have asked the owners to let us know if their guides find scats during their walks, and they have agreed to let us then take the samples away for analysis at Piro. We are very grateful to Kim, Phil, Daniel, Adriana and Andres for their support!

During our visit to the Osa in May last year, we visited one of these lodges mere hours after a puma had been sighted on the lawn, snatching an agouti as it foraged! Though we were obviously disappointed not to see the cat, finding a large, steaming scat (complete with agouti bones!) on the edge of the forest almost made up for it. And then, just a few weeks ago in January, our patience finally paid off – as we drove back up towards Cerro Osa from visiting the station at Piro, Peter slammed down the brakes of the car, and pointed ahead. There, bounding across the road, was an ocelot! It was the middle of the afternoon, and the cat was kind enough to pause for a moment by the side of the road, staring up at us, as we stood motionless, not daring to breathe, admiring its glossy patterned coat and beautiful face. Then, a few seconds later, it was gone, silently slipping away through the undergrowth.

We know how lucky we were to have such a great view of this elusive species. It also made us realize how much wild animals do need the corridor between Matapalo and Corcovado; a road through an ocelot or jaguar territory leaves the cat vulnerable to being hit by a vehicle, and prey can be more scarce with people and cars around. Our overall aim is to reduce this potential conflict between humans and wildlife, and also protect species from the potentially harmful consequences of parasites. Hopefully, our research will go some way toward understanding disease dynamics in the Osa as it is now, and then be used to minimize transmission in the future, for the improved health of all animals, both domestic and wild.

Claire Standley is a researcher from Princeton University conducting ongoing wildcat research at the Piro Biological Station and surrounding areas in the Osa Peninsula.