Posted at 15:25h in Uncategorized by projects 0 Comments

On April 23rd I was invited to participate in the 10th annual Biodiversity Symposium of the Osa Peninsula, sponsored by the Conservation Area of Osa (ACOSA), in order to promote the exchange of ideas and give rise to awareness of the newly marked biodiversity zones, to a sensitive and environmentally active public. The previous years talks in the symposium had included mainly land issue topics focusing on trees, primates, bats, and aves, but this year we kick-started the conversations with a focus on marine sciences. 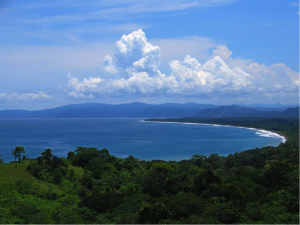 This talk had one of the highest turnouts of participants, all of whom demonstrated their interest in learning and understanding how the complex Golfo Dulce ecosystem functions. One of my objectives during the talks was to make sure that the public understood the unique characteristics that result in the Gulf being classified as a Tropical Fjord. These included things like: topography that results in the reduced exchange of ocean water in the gulf, heavy upper surface area current circulation, anoxic waters conditions at 215 meters, and pronounced gradients of temperature, salinity and oxygen concentrations within the 50-60 meter range. 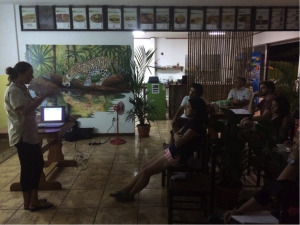 Some of the most important ecosystems within the Golfo Dulce include mangroves and coral reefs; they were both described in detail according to their composition and distribution within the Gulf. Some species that received an important emphasis in regards to their conservation aspects included the Pavona frondifera, a species of coral that presently has large sized colony scattered throughout the Oriental Pacific, particularly in a patch of territory on Sandalo.

Another species that was described according to it’s vulnerability status and touristic importance was the Northern and Southern Humpback Whale (Megaptera novaeangliae), that visit the Golfo Dulce twice a year due to the fact that they breed, nurse, and mate here. There is also a distinct importance in genetic exchange because the Northern and Southern Humpback whales both have coinciding migrations to the Golfo Dulce to breed between October and December, if not they rarely encounter one another in the wild due to their hemispheric migratory patterns.

The public was also incredibly interesting in talking about the marine snake Pelamis platura, more commonly referred to as the yellow-bellied snake. This snake is unique in that it has made it’s way to other warm parts of the world, but cannot be found anywhere else in Central or South America besides the Golfo Dulce and Panama. They can also survive entirely in ocean waters, living, mating, and birthing in open waters.

These talks were a good start in motivating the local Oseno peoples, for them to learn more about wildlife of the Osa they call home, and to help instill a sense a pride and privilege for the land they call home.