Posted at 16:37h in Uncategorized by Melinda Housholder 0 Comments

World Wetlands Day is celebrated on February 2 of each year, the date on which the Convention on Wetlands was adopted. Wetland is all those areas that remain flooded or at least, with soils saturated with water for long periods of time – thus, water defines its structure and ecological functions. Wetlands are vital for human survival. As one of the most productive ecosystems on the planet, they harbor a biological diversity and water sources on which countless species of plants and animals depend for subsistence. However, the surface and quality of wetlands continue to decline worldwide, so the benefits that wetlands provide to human beings are in danger. 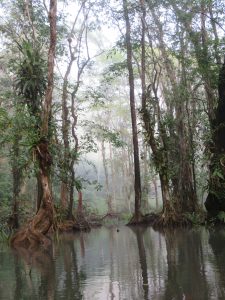 Mangroves in the wetlands along Rio Esquinas, Costa Rica

Due to the endangered condition of wetlands worldwide, on February 2, 1971, the Convention on Wetlands was adopted in the town of Ramsar, Iran. This convention is the first intergovernmental treaty that serves as a framework for national action and international cooperation for the conservation and sustainable use of wetlands. The convention includes lakes and rivers, underground aquifers, swamps and marshes, wet grasslands, peatlands, oases, estuaries, deltas and low tides, mangroves and other coastal areas, coral reefs, and artificial sites such as fish ponds, rice fields, reservoirs and saltworks. To date, the list includes 2,200 designated “Ramsar sites” covering an area of more than 2.1 million square kilometers, an area larger than Mexico. 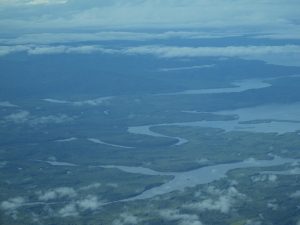 The Térraba Sierpe wetlands in Costa Rica from above

In the case of Costa Rica, about 350 wetlands are reported, which cover 7% of the national territory; 12 of them are considered of global importance and therefore were declared as Ramsar Sites. One of these sites is the Térraba Sierpe National Wetland, located in the south of the country, which with an area of 32,000 hectares (79,073 acres) corresponds to the largest mangrove area in the country. Mangroves are one of the most productive ecosystems on the planet, offering a variety of services such as recreation, tourism, carbon capture, water purification, shelter for living beings and coastal protection. 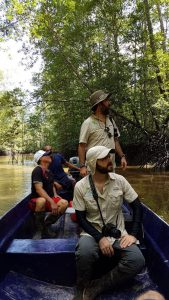 Osa Conservation is dedicated to protecting these vital habitats. Currently, we are working in the Térraba Sierpe National Wetlands  on a project to  “strengthen the mangrove ecosystems and improve the quality of life of the coastal populations.” This project will help to actively restore 50 hectares of mangroves, working in conjunction with the Association of Fishermen and Marine Resources of Ajuntaderas y Afines (APREMAA), a local organization that is in charge of establishing mangrove nurseries and preparing the land. In addtion, the project  promotes sustainable practices regarding the extraction, processing and commercialization of mollusks in the wetlands. Efforts of this nature seek to preserve the services offered by wetlands through the sustainable use of their resources for the benefit of coastal marine communities.