Posted at 11:31h in Birds by projects 0 Comments

Have you ever sat and marveled at the wonder of bird migration; the journey that birds undertake between their winter and summer

homes?  Well if so, you’re not alone, and it is a cause for celebration!  Each year hundreds of thousands of people gather to celebrate International Migratory Bird Day (IMBD) in support of migratory bird conservation.

You may be asking yourself, why a post on a day normally held in May.  Aha, that all depends on where you are in the hemisphere.  Because there is more than one officially recognized date, everyday, including today, is Migratory Bird Day.  Read on as I explain…

There are almost 350 species of birds that migrate between their nesting grounds in the north to their wintering grounds in more favorable climates somewhere south.  Of course not all birds make such dramatic journeys.  Many species migrate locally, regionally and elevationally such as many do here in the tropics, and so this day is for them as well. 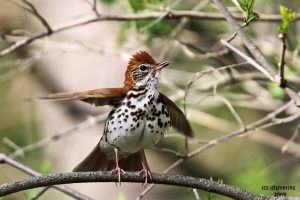 Migratory birds are important to us in many ways.  Many of them are the songsters that fill our northern forests and backyards with their melodious song every spring marking the change of the new season and the new life that it brings.  Migrants are important ecologically as they are the consumers of insects, many of which are pests, and they are also important to the tourism industry of many economies both temperate and tropical.  Here in their tropical wintering grounds, places like the Osa Peninsula provide an important home during the non breeding months of the year.

Unfortunately many migrant bird species are declining facing many threats on their wintering and breeding grounds as well as on their migratory routes.  International Migratory Bird Day was thus created as not only a day to celebrate migrant birds but as a call to action in their conservation through partnerships.

Since 1993 the Smithsonian Migratory Bird Center, Partners in Flight, the National Fish and Wildlife Foundation, the US Fish and Wildlife Service amongst many others have come together in science and conservation for the protection of migratory birds.  Each year hundreds of organizations hold activities and celebrations all focused around a particular theme.  This year’s theme is The Power of Partnerships giving attention to the fact that avian conservation can only happen through strong partnerships across the globe.   Twenty species are highlighted this year to include the Wood Thrush (Hylocichla mustelina), the Golden-winged Warbler (Vermivora chrysoptera) and the American Redstart (Setophaga ruticilla), all species in decline found here on the Osa and shown here as well thanks to the artwork of Bob Petty.  Visit BirdDay.org for a list of each species and more information on each species’ conservation status and the partnerships formed to help protect them.

We here at Friends of the Osa are celebrating now in our own way by conducting an avian monitoring program set up specifically to follow US Fish and Wildlife Service protocols in order to monitor the population status of both resident and migratory birds and to make our data available to all organizations interested in targeting conservation measures for specific birds in decline.   We are also working with Partners in Flight in data analysis and dissemination of results to the bird community.

The three species shown here are only a few of those suffering from population declines but it is our hope that through a strong monitoring program and strong partnerships we can protect those species that count on Costa Rica’s Osa Peninsula for their safe winter harbor.

Orioles and Ocelots: Wisconsin’s Costa Rica Connection, authored by Craig Thompson who organizes conservation birding trips to the Osa Peninsula, provides a great explanation of how these north-south partnerships are strengthening bird conservation.