23 Jan Jaguars: Jewels of the Forest

Posted at 20:30h in Land Conservation and Forest Restoration, Science and Research, Wildcats by projects 0 Comments

Jaguars are very charismatic creatures, and for indigenous people and ancient civilizations, were considered symbols of power, majesty and wisdom. While that symbolism still holds true, we now also recognize their intrinsic value for maintaining biodiversity in the forests. They are on the top of the food chain and therefore the health of their population affects all subsequent levels. In the absence of Jaguars, breakdowns occur in the ecosystem such as increases of populations of herbivores, decreases in population of some species of plants (eaten by herbivores) and loss of other species of birds, insects and reptiles that depend on those plants. 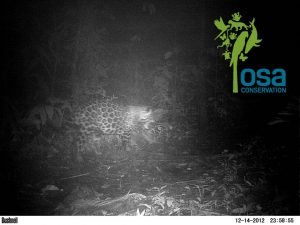 The presence of Jaguars in a region is an indicator of the health and integrity of the forest since they are the most sensitive species of all large cats to exploitation and habitat alteration. Accordingly, they are also known as “health indicator species.”

The Osa Peninsula has been characterized as one of the most important places in the country for Jaguar conservation and conservation of their habitat which is threatened by poaching of their prey, habitat fragmentation and persecution due to predation of livestock. For all those reasons, the presence of Jaguars, as identified by camera traps placed in the Northern part of Osa Conservation’s Cerro Osa property, brings not just a first sign of good health of our forests but also hope that these joint efforts will lead to conservation actions to conserve jaguar habitat and protect the integrity of the forests of the Osa.

About the researcher
Juan Carlos Cruz, M.Sc. in Conservation and Wildlife Management from Universidad Nacional de Costa Rica (National University of Costa Rica) is a member of the research program Programa Jaguar, which focuses on doing biological and ecological research about the six species of felids and their prey of Costa Rica with a special focus on Jaguar, generating knowledge and tools that contribute to the conservation of these felids and their habitat.