There’s something about measuring squirming sea turtle hatchlings that automatically puts a smile on my face. But this batch of babies was extra special. They were from a nest that I relocated on my very first patrol on Piro, way back in the beginning of September. A little over fifty days later, and the ping-pong shaped eggs I once placed in a bucket and buried in the hatchery had resulted in one hundred flipper-flapping babies. I was enthralled. 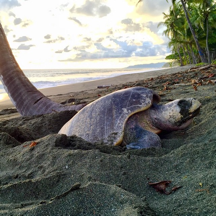 Flash-forward two hours later, when my fellow Research Assistant Erin and I were leaning against a palm tree outside of our vivero de tortugas marinas (sea turtle hatchery) and reading. We were waiting on the arrival of a large group of college students and Osa Conservation employees to help us liberate our new hatchlings before sunset. As Casey (the other Sea Turtle Research Assistant in our group of three) whistled, I craned my neck around to say hello. But to my surprise, Casey wasn’t the only one demanding attention. A female Olive Ridley (Lora) was slowly hauling her body up the sandy embankment in front of me to lay her eggs. It looked as if she was using her two not-so-terrestrial but powerful front flippers to head directly to where I sat, which also happened to be directly in front of our hatchery. And it was 4:00 in the afternoon.

Olive Ridleys are in fact known to lay eggs during daylight, but typically in large groups called arribadas (meaning “the arrival” to the people where this phenomenon occurs). However, arribadas do not occur on Piro, or anywhere on the Osa for that matter. The female in front of us was clearly alone. 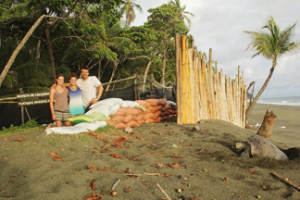 Fifteen minutes later, she was hard at work digging her nesting hole, and the rest of our party had arrived to share in this incredibly rare and special moment. Afterwards, over three hundred babies released from our hatchery scrambled across the sand, parallel with the tracks our afternoon visitor had left. They safely entered the waves, illuminated by the setting sun. 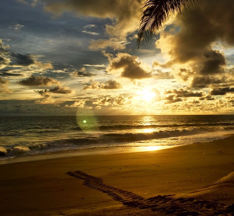 Just a few nights ago, we had another visitor at the hatchery. She was much larger and slightly more ornate; a Green turtle (Verde). And rather than having the light from a setting sun framing her, we had one of the clearest nights I have ever witnessed. Countless constellations blanketed the sky, adorned with the occasional shooting star. As we walked in the sand, the pressure from our bare feet sparked a bioluminescent lightshow: blue, fluorescent, and sparkling. I grew tired as we waited for the Green to dig her nest, but I hardly dared to close my eyes in fear of missing something.

I have less than a week left here now, but moments like these will stay with me for a lifetime. Working in sea turtle conservation is a grand privilege within itself, but there truly is no other place like the Osa.