Posted at 18:10h in Science and Research, Sea Turtles by projects 0 Comments

What turtle has the best eye sight?

And that´s why it´s so important that we make sure on night patrols that we spot the ladies before they spot us…the last thing we want to do is scare them back to the sea. A good turtle detective just doesn´t do that. An Olive Ridley could have swum thousands of miles to get to this specific beach  which is why here at Friends of the Osa we do what we can to ensure we have minimal impact on beach patrols- especially at night. Females can be deterred from nesting and the hatchlings’ important journey to the sea can be disrupted just by the presence of white lights. For this reason, we only use red light on the beach. Sea turtles, like many other reptiles, don´t actually have the color red within their visual spectrum so it means we can work safe in the knowledge that they don´t feel like a criminal fleeing from the scene of a crime! 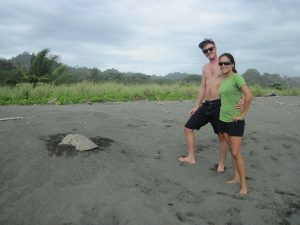 Volunteering with sea turtles on the Osa Peninsula, Costa Rica

We´ve just said goodbye to the lovely Brandy and Nick who were volunteering  with us for 2 weeks, staying at Finca Exotica in Carate. Their second day it was unnecessary to use ANY  artificial light to spot a turtle as on an afternoon stroll to the lagoon at around 3:30pm, we  discovered a solitary uptrack and on the top…an Olive Ridley covering a nest! It was a beautiful day anyway so this just completely topped it off. Most sea turtles come up during the night to lay their eggs as they feel it´s safer but this individual obviously had other ideas! It was a real treat to see her in natural light.

Of course, night patrols aren´t always a walk in the park.  We are in the peak of the rainy season, and it’s not uncommon for there to be times when the rain has penetrated every ounce of clothing, sand has made its way into every crevice you never thought possible and throughout the patrol, one can´t help but feel like you’re on the losing side in World War III against the elusive sand flea. But the second you catch a glimpse of a turtle, watching each egg drop into the nest she created ever so carefully, we are reminded of how much energy has been invested in this process and just how vital our efforts are to protect nesting sea turtles. Our efforts here on the Osa seem so small- but nest by nest, day by day, the data we gather can be interpreted and contributed to the global effort for sea turtle conservation, and together we can make a difference.  Besides, who wouldn´t care to swap the office for this?