17 Jul Letters From the Field: On the tail of the Black-cheeked Ant Tanager

Posted at 20:53h in Birds by projects 0 Comments 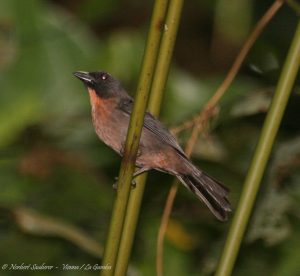 Imagine being woken up each day by the sudden deep howl of a troop of howler monkeys and the positively curious sound of a singing Gray-necked Wood Rail. Time for work! This spring, I was lucky enough to spend a few months working at Piro Biological Station, Osa Conservation’s research center.

My main objective was to get a better understanding of the habitat use of the Black-cheeked Ant-tanager (Habria atrimaxillaris), an endangered bird found only on the Osa Peninsula and the Golfo Dulce of Costa Rica. These birds have not been extensively studied and their population appears to be declining due to habitat loss. I set out to see how Black-cheeked Ant-tanagers used habitat around Piro—were they found in primary forests? Secondary forests? In transition zones? What were the characteristics of the zones they used during the time of year when I was there? I set about this by walking routine transects through different forest types around Piro each day and when I was lucky enough to encounter a Black-cheeked Ant-tanager, or even a small group of three or four, I took the opportunity to gather as many observations as possible and map where groups were found with my GPS.

Further study of these birds at Piro and elsewhere is critical for the development of an informed conservation management plan for this endangered species. Since these ant-tanagers are declining due to habitat loss, we need to examine their habitat use at a finer scale. Having a few birds at Piro identified as individuals simply with color bands (and ideally one day with radio-tags) could help us begin unraveling a whole slew of questions related to their movement over different spatial and temporal scales, their social interactions, and their variation in habitat use (i.e. do some groups occupy only the border of primary and secondary forest while others use strictly primary forest?) 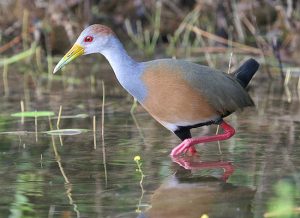 When I wasn’t weaving my way through the forest listening for the nasal chatter of ant-tanagers, I spent time doing
outreach. Each week I gave a lesson about environmental stewardship at La Escuela de Río Piro, the small school located on Osa Conservation grounds. Students come from near and far to get to school each day. One student even spends about 1.5 hours each way riding el colectivo—public transportation in the form of a covered truck—all the way from Carate. While I was at Piro, there was a group of 6 eager and polite students, all of whom were males between the ages of seven to 14. Topics ranged from the fundamentals of environmental stewardship to bird migration to reforestation. Teaching in Spanish added to the adventure!

I also spent time giving outreach presentations at two neighboring ecolodges in the area: Bosque del Cabo and El Remanso. During each gathering I shared information with tourists about the Osa Peninsula’s rich biodiversity and about current projects underway by Osa Conservation. My hope was to further engage tourists with their environment and to help foster a desire to protect this mostly undeveloped part of the country.  The grand hurrah was my final presentation which took place at El Remanso. Coincidentally the guests at the time were all Spanish-speaking so I gave my presentation in Spanish for the first time. The guests seemed delighted at my effort to communicate in their language instead of mine and we had a great exchange and question session afterwards.

For those who aren’t already aware, the Osa Peninsula boasts some of the most beautiful beaches of Costa Rica. Rainforest meets ocean, Scarlet Macaws rawwwk overhead, and sea turtles come here to lay their eggs. During the middle of the day, I often went down to this serene setting, not to relax on the beach, but to pick up trash. Unfortunately, an impressive amount of trash gathered on the beach during the months I was at Piro, most of it washing ashore from sea. It concerned me (and quite frankly depressed me) to walk less than a quarter of a mile and to already have filled up an entire trash bag with plastic bottles, fishing line, styrofoam, shoes, lighters, you name it. This ecosystem, home to all sorts of endemic plants and animals, was suffering from the irresponsible actions of people in some other geographic location, so it seemed. Particularly concerning was the fact that sea turtles were starting to arrive on Piro’s beaches to nest and had to dodge all sorts of debris before finding the perfect spot for their egg chambers. I had my work cut out for me and luckily often was joined by one of Osa Conservation’s sea turtle volunteers. Off we went filling up plastic bags, trying to do our part and clean up the beach. The more hands the better. When I left there were plans in place to continue the beach clean-ups with the sea turtle volunteers this summer.

There is never a shortage of things do or ways to help with Osa Conservation. Whether it’s conducting research on an understudied species, volunteering with the sea turtle project, working with the local community, planting native species, or helping keep the ecosystem free of contaminants, the opportunities are endless. This ecosystem begs to be studied, protected, and appreciated.