02 May Mangroves: Restoring one of the most threatened ecosystems

Posted at 00:57h in Uncategorized by Intern Osa Conservation 0 Comments

Globally, mangrove ecosystems are being destroyed 3-5 times faster than terrestrial forests. The main threat is a change in land use caused by aquaculture, agriculture and over exploitation of resources; another threat is climate change, which results in rising sea levels and an increased impact from storms. 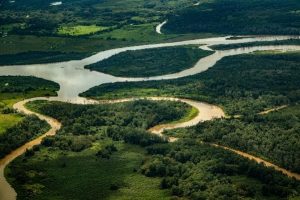 Aerial image of the HNTS showing fragmented areas of the ecosystem due to the fern (Acrostichium aureum). Photo by: Batsú Estudio.

The South Pacific of Costa Rica is home to the largest wetland in Central America (32,000 hectares), composed mostly of mangrove (14,000 hectares). Because of its size, it houses a large diversity of flora and fauna, which is the reason the Térraba Sierpe National Wetland (HNTS) was declared a Wetland of international importance, or RAMSAR site, in 1995.

HNTS mangroves do not evade the threats that affect this magnificent ecosystem; there are currently more than 2,500 hectares of mangroves that are colonized by a dominant fern (Acrostichium aureum). The fern-dominated areas are the product of mangrove deforestation in the last 50 years and were subsequently abandoned. 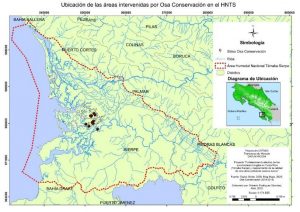 Recognizing the importance and fundamental role of mangroves, Osa Conservation works alongside local population to restore mangrove ecosystems within the HNTS. The objective of the project is to establish the most appropriate procedures for mangrove rehabilitation zones that have been dominated by fern (Acrostichium aureum). It is intended to have the verifiable technical and scientific basis with which it can proceed in a certain way in the implementation of a project on a larger scale in the HNTS. 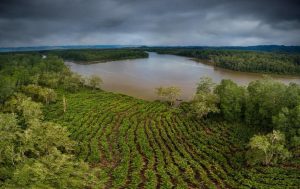 Aerial image of a restored site in the HNTS with the trenches removal technique. Photo by: Batsú Estudio.

So far, we have 30 hectares restored and 6 different designs (and are working toward more). Also, with the monitoring of the sites, we obtain information regarding the growth and development of the trees. Generating more information about this great ecosystem will help to assess its services and importance, as they are a source of subsistence for local communities, improve water quality, provide a frontline for coastal communities in the face of storms, floods and hurricanes, and are considered to fix 5 times or more carbon than other ecosystems.

This project has been funded by ALDI SÜD and the KfW-DEG bank and coordinated by the German consultancy bluesensus sustainability & seafood consulting. The project has been implemented by Conservation Osa, APREMAA (the Association of Piangüeros and Marine Resources of Ajuntaderas y Afines), with support from SINAC, MINAE, the National University of Costa Rica, the Costa Rican company Rainbow Export Processing and the GIZ.