07 Nov Monkeying around the restoration plots

When I came to Costa Rica, one of the things I was most excited about seeing was the abundant wildlife that exists in the Osa Peninsula, including many species that I would never be able to see in the United States. What I didn’t realize was how immersed in this wildlife I would be while working at Osa Conservation. 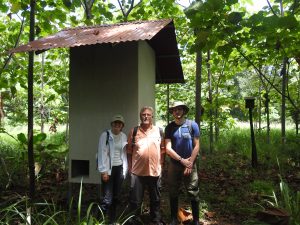 On my first day at Osa Conservation I was told of the four species of monkeys that live in the area: howler, squirrel, spider, and white faced capuchins. My hope that was by the end of my 5 week stay I would have seen each of the species, yet my hopes were far surpassed and my goal was achieved in just four days. 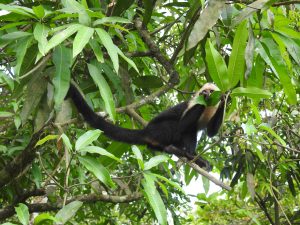 Not only did I spot four species in four days, I saw monkeys nearly every single day I was at Osa Conservation. In the early mornings I would be walking to the farm to do field work for  the Reforestation project that I interned with, still not fully awake, when I would hear rustling in the leaves above. Moving my gaze upwards, I would search for the swaying branches and then spot several spider monkeys, gracefully moving from branch to branch as they crossed the road just above my head. I would stop and watch them for a bit, and sometimes a spider monkey would stop in the tree when it spotted me as well, just hanging by its tail, seeming equally as interested in my movement as I was its. Walking to work at 7am never seemed like a drag to me when I knew there was potential to watch monkeys leap with ease through the canopy.

One morning while surveying trees out in the plots for the Reforestation project, Jessica, whom I worked with, and I heard a large branch crash through some trees. We stopped briefly to look around at see what might have been the cause of this disturbance. To our surprise, it was a group of 20 or so small squirrel monkeys. They were making their way through the trees that lined the edge of one of the experimental plots, and one by one they leaped from branch to branch, following the path of the one before it.

One particular squirrel monkey slightly deviated from the general path of the others, coming out onto a branch that extended furthest into the plot. I was so close to this squirrel monkey I felt as though when I widened my eyes to “say hello” I could see its eyes widen in response. After a few moments of looking at each other in awe, the squirrel monkey returned to its pack and went on its way, climbing through the forest with ease. 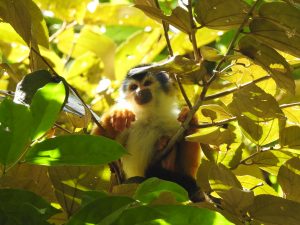 Interning at Osa Conservation has given me the opportunity to have countless incredible and unique experiences with wildlife that I do not think I would be able to find anywhere else. In the 5 weeks of my internship I felt as though I was able to not only immerse myself in the culture of Costa Rica but the environment of the Osa Peninsula and gain an appreciation for the immense amount of wildlife diversity it supports. 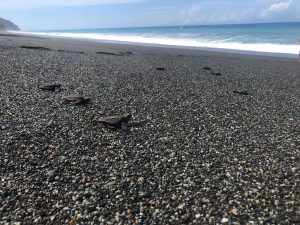