When we talk about the jaguar, it is difficult to distinguish the many vital roles this iconic species plays. All throughout Latin America, the jaguar is deeply rooted in the indigenous culture. From a cultural point of view, it has been part of many artistic and cinematic works. From a conservationist point of view, it has been considered everything that a species can be: an umbrella species, a flagship species, a keystone species, an indicator species, and an apex predator.

In spite of its huge importance, however, we know very little about the species’ ecology and what is necessary for its conservation.

Due to the jaguar’s biological characteristics, research techniques necessitate much physical, economic, and logistical effort, and thus, it is no easy task to study them. However, when these efforts are realized, every result is significant and further augments our knowledge of biology and ecology.

This year in Costa Rica, Osa Conservation worked with partners to analyze the results of the first national jaguar initiative, which brought together jaguar researchers and studies throughout the country to synthesize what we know about this important species at the national level.

The larger initiative is called: “Jaguar conservation in Costa Rica throughout the integration of species registration data and habitat modeling.” It is a product of the Promotion of Participative Management for Biodiversity Project, led by the National System of Conservation Areas and the Japanese Agency of International Cooperation with the collaboration of Costa Rican jaguar researchers.

In over a year of gathering information from diverse jaguar studies (including research from camera traps, excrement studies, road presence, sightings, records of predation of cattle and sea turtles, tracking collars, and genetic material provided through excrement), meetings, seminars, map creations, and expert consultations, the initiative obtained results that widen our knowledge of the state of jaguar conservation.

An essential part of this initiative was being able to describe the current distribution of the species and modeling ideal habitat conditions, which established guidelines for determining conservation priorities for this endangered species going forward.

Utilizing current species distribution registries and variables (habitat, human impact, and climate) chosen by experts, the initiative predicted suitable habitats for the species throughout the continental territory of Costa Rica. 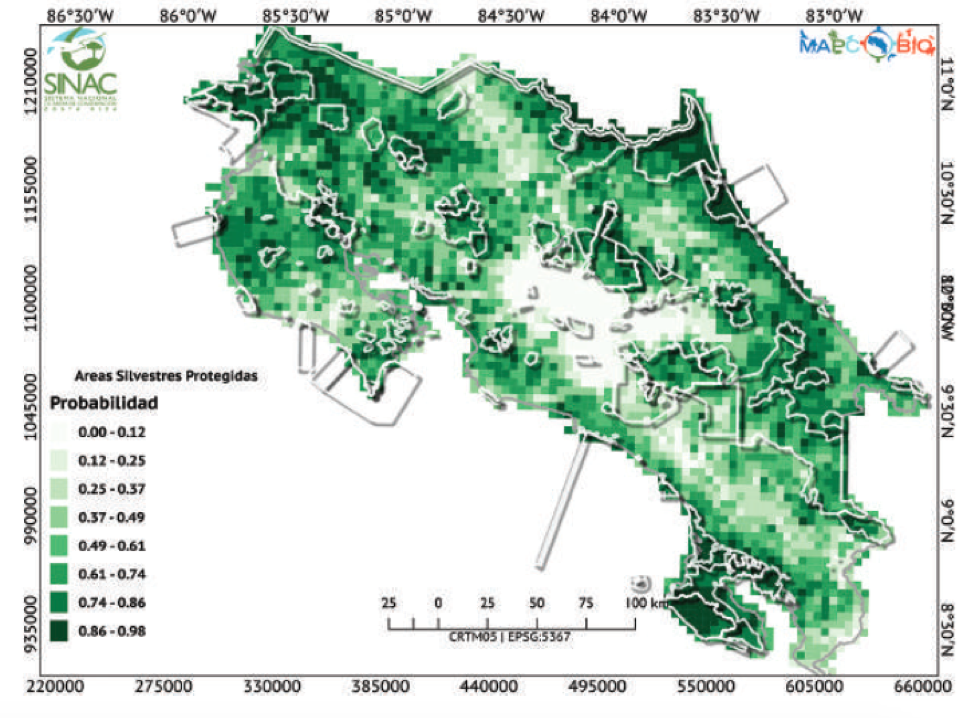 Zones were identified with the best habitat conditions for the jaguar. They were delineated as focal areas with the principal objective being to evaluate the availability and characteristics of existing biological corridors at the national level in order to connect these areas.

The focal areas identified are located largely in the Talamanca Caribe and Amistad-Pacifico region, the Caribe-Norte, the Osa, and the Cuanacasta and Volcanic Mountain Ranges.

The findings of this study represent recent knowledge about the distribution of the species and its ideal habitats, based on registries of presence/absence, relying on the participation and evaluation of national and international experts studying the species. Bringing together this diverse array of studies and researchers is unprecedented in Costa Rica. It constitutes the starting point for developing a strategy that prioritizes medium-term conservation efforts for the sake of obtaining a better and more efficient response to the conservation needs of the species, based on biologically and scientifically supported information.