27 Dec OC gears up for birding and filmmaking! 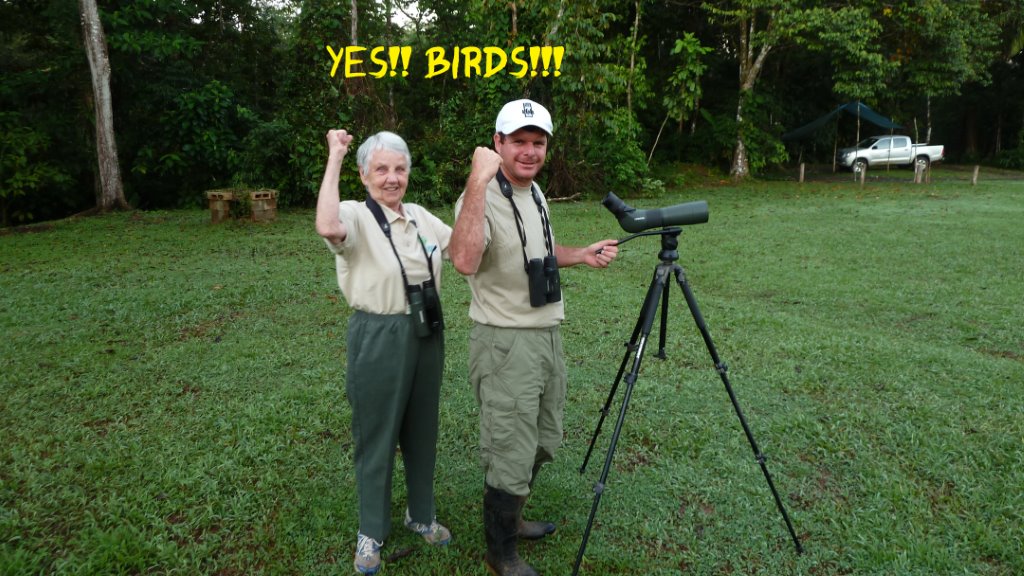 Aside from the hundreds of native tropical birds who reside in the Osa, the peninsula is also winter home for many North American migratory birds. Every spring, they return to nest – the Scarlet Tanager, the Indigo Bunting, the Golden-Winged Warbler, the Baltimore Oriole, and scores of other migrant songbirds. And every winter, they make the perilous journey back to the rainforests of Central America to wait out the long cold season. Unfortunately, their wintering grounds are under intense pressure from development and natural resource extraction. The rainforests of Central America are being degraded at an alarming rate – and the birds that call these forests home – the endemic species and the migrants who winter there – have no where to turn. North America’s birds need a place that is still wild – our birds need the Osa.

Every winter, OC hosts birding groups from all over the world at our biological stations who come to see Osa’s magnificent birds and help us to protect their home. Unfortunately, aside from these avid birders, not many people understand the global significance of the Osa’s biodiversity or how many of our birds depend on it for survival – so this coming January, a film crew from Wisconsin will be traveling to the Osa with one of these birding groups to conduct a field shoot for the production of two documentaries – one to highlight the importance of the Osa as a biological hotspot, and another to document the efforts of Osa Conservation in protecting Osa’s birds – particularly the Yellow-billed Cotinga. From January 23 – 31st, 2014, this birding trip, led by veteran conservationist, OC board member, and birding addict Craig Thompson, will take the crew on a locally-guided tour of rainforest, beach, river, and wetlands to spot the most elusive Osa birds and interview local Osa residents. 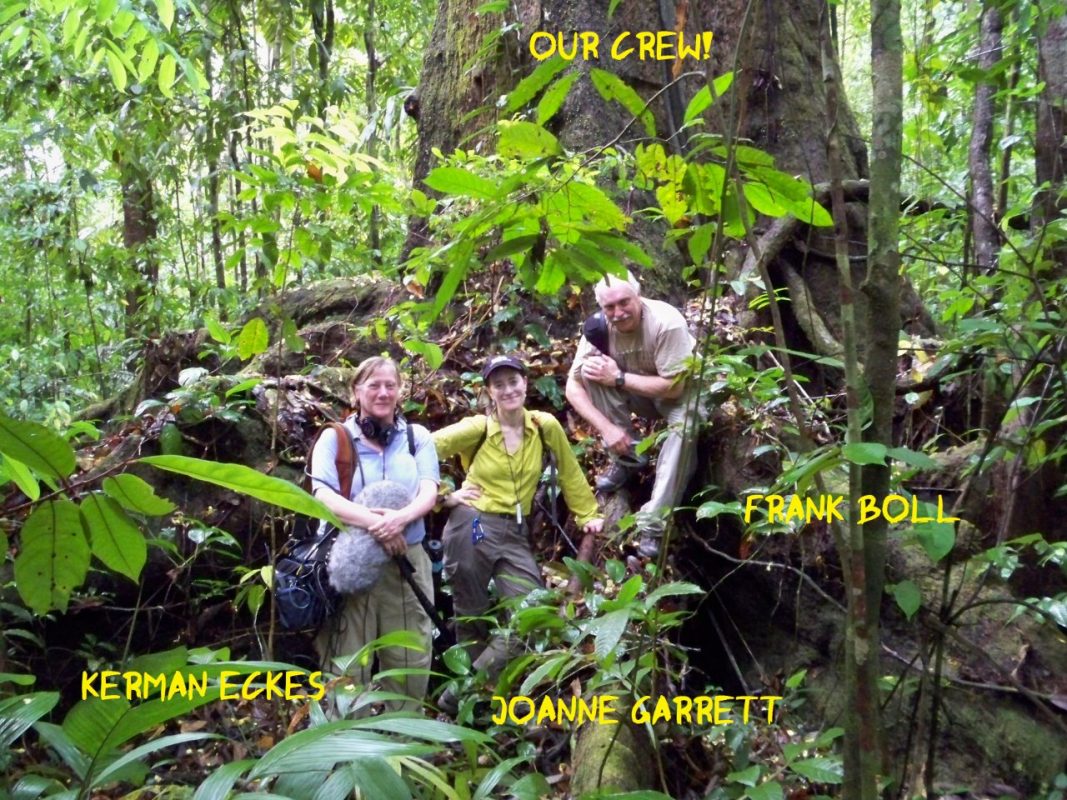 Luckily, our film crew are no strangers to filming in the jungle! Producer and writer Jo Garrett has been making documentaries for over 25 years. For the last decade, Jo and videographer Frank Boll have collaborated on a series of stories and documentaries for PBS on the plight of wildlife – including bats, black bears, pine martens, wolves, rattlesnakes, and more – but Jo’s favorite stories spotlight birds and the problems and successes in bird conservation. That passion led to the production of the documentary Our Birds, which highlights the struggles neotropical migratory birds face on their perilous journeys.

Frank Boll has trekked the world shooting stories for over 40 years. Frank’s most recent project took him to Peru in 2012. Funded in part by a grant from the National Geographic Society, Frank spent a month in the cloud forests, documenting the efforts of conservation groups working to save Peru’s critically endangered Yellow-Tailed Woolly Monkey. 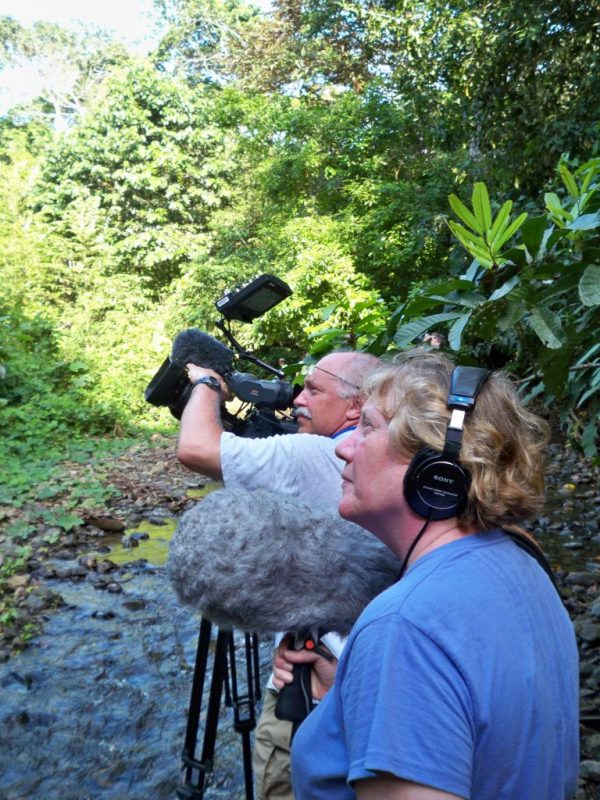 Kerman and Frank on location for a previous film shoot.

Kerman Eckes has worked for twenty years as a location sound recordist and sound designer for Wisconsin Public Television. She’ll get great stereo recordings of the birds calls of the Osa but she also brings other talents to the job: she’s fluent in Spanish, she’s an accomplished professor with a master’s in film production, and she’s served on video production crews in both Costa Rica and Nicaragua.

This film shoot will definitely put Jo, Frank, and Kerman’s skills to the test, as they trek through jungle and wetlands to document the stories of Osa’s birds. Filming birds in the wild also presents a unique challenge – perhaps even more so than other animals. Birds, especially warblers, are constantly moving – searching the trees and ground for insects, fruit, and other sources of food. How do you capture such tiny, quick creatures on camera, especially ones that are far away and so easily startled? The answer is to combine a camera and a telescope!

Videographers use a digiscope to capture birds on film – essentially a digital camera mounted to a birdwatcher’s spotting scope, which is a light, portable telescope. Frank uses a digiscope comprised of a Canon 60D DSLR camera attached to a Swarovski 30-70X spotting scope, pictured below: 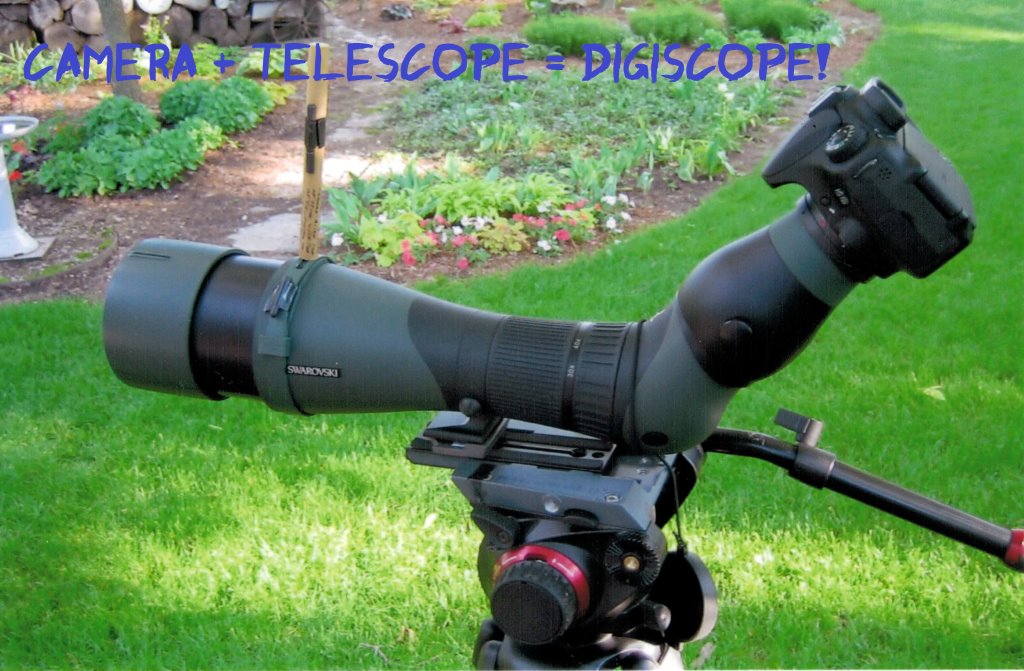 Due to their constant activity, following birds with such high-powered magnification presents another significant challenge. Footage often has to be trimmed to clips less than 10 seconds long that are later edited together – a serious time investment!

Check out some footage that Frank has already shot with his digiscope of one of Wisconsin’s migrants, the Yellow Warbler, known affectionately as the “little yellow comet.” We’re hoping to spot one of these little guys on our shoot down in the Osa!

Here’s some more footage shot by Frank, of two Orioles engaged in a “flyoff!”

This year, I’ll be joining this birding trip, so stay tuned for updates on the field shoot as it unfolds – direct from the Osa!

Read more about our film project here – and even help fund it!