Posted at 10:25h in Birds, Community Outreach by projects 0 Comments 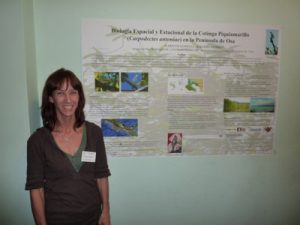 The Costa Rican Ornithological Union’s second annual conference was held July 28 – 30th 2010 in the school of biology at the University of Costa Rica in the capital of San Jose.  The conference was dedicated to Daniel Janzen and his pioneering work in the field of conservation and reforestation in Costa Rica over the last several decades.  Attendees present represented national and international organizations working hard at avian science and conservation throughout the country coming together to share common interests in the more than 830 resident and migrant bird species found in this tropical landscape.

Friends of the Osa’s avian ecologist Karen Leavelle was in attendance to present a poster outlining the upcoming Yellow-billed Cotinga radio telemetry project slated to begin at the end of this year.  Also in attendance were Liz Jones and Abraham Gallo to present their findings from a two year study looking at the current distribution of the Yellow-billed Cotinga, Black-cheeked Ant-Tanager and the Mangrove Hummingbird all of which are endemic species considered to be endangered by BirdLife International.  This project was supported by Friends of the Osa, the American Bird Conservancy and the Evergreen Foundation producing vital information highlighting the conservation status of each species and the importance of the rainforest and mangrove habitats to species survival remaining on the Osa Peninsula and surrounding areas. 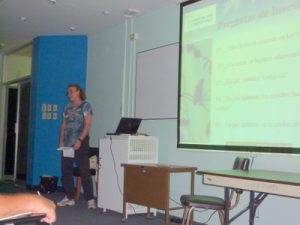 The Yellow-billed Cotinga project was born out of Liz and Abrahams results on the species current distribution.  This project will focus on tracking Cotingas throughout the Osa Peninsula in order to determine the spatial and temporal distribution of a population of Cotingas from the Rincon area.  Essentially this project will show temporal habitat use and the spatial movements of the birds between feeding, nesting and roosting areas.  Information gained will indicate forested areas in need of protection for this species and others that also depend on the same habitats for their survival.  Keep your eye for more information on this project as its December date approaches.

The conference itself and Friends of the Osa’s participation proved to be important as a manner of disseminating information to a national and international ornithological audience on project results, upcoming studies and our role on the Osa Peninsula in avian science and conservation.