Posted at 15:10h in Marine Conservation, Science and Research by projects 0 Comments 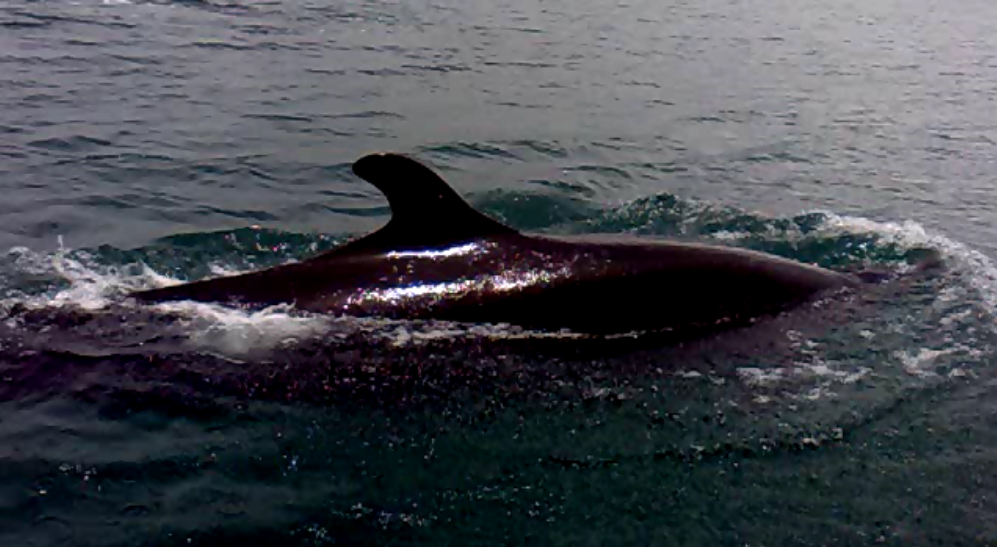 A video still of a Pseudorca, or false killer whale, in Golfo Dulce

Brooke Bessesen conducted Marine research at the Osa in 2010 and 2011 as a recipient of the Greg Gund Memorial Fellowship. Check out her Golfo Dulce report on our website.

Jorge and I were always thrilled to see dolphins, as they are icons of the sea. Luckily, sightings were relatively common (only sea turtles were seen more frequently) and these graceful cetaceans graced our bow almost every day we were on the water. We observed many dolphin behaviors: foraging and traveling, mating and calf care, spyhopping and playing. But, of course, dolphins are not all same.

The most common delphinids seen in Golfo Dulce were Bottlenose dolphins (Turciops truncatus) followed by Spotted dolphins (Stenella attennata). Even though some Spotted dolphins don’t have spots, these two species are fairly easy to tell apart. Spotted dolphins are smaller in body size and have distinctly sickle-shaped dorsal fins. There are behavioral differences, too.

Most of the Bottlenose dolphins in Golfo Dulce appear residential and some even seem to show fidelity to certain parts of the embayment. This species tends to hang out more coastally, especially near river outlets, sometimes chasing ballyhoo and needlefish at the surface. While they occasionally converged into congregations of five to 15, the Bottlenose dolphins were usually seen in smaller groups of two or three.

Spotted dolphinsmigrate in and out of Golfo Dulce, generally using the deeper middle waters of the inlet. The average 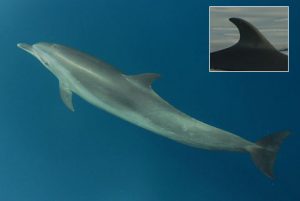 A young spotted dolphin speeds along next to our research vessel

group recorded during our survey was five to 60 individuals; however, we recorded several sightings of scattered herds estimated to include 100 to 500 individuals. At times large groups of these gregarious cetaceans could be seen playfully flinging themselves into the air, a show-stopping riot of activity.

A sighting of False killer whales (Pseudorca crassidens) was also made during our study period while aboard the vessel of Project Golfo Dulce Wildlife. We followed about 30 individuals, adults and at least one calf, as they traveling and foraging between Sándalo and Playa Blanca in the upper half of the gulf.

It is also interesting to note that Spinner dolphins (Stenella longirostris) and Short-beaked common dolphins (Delphinus delphis) have been reported inside Golfo Dulce. 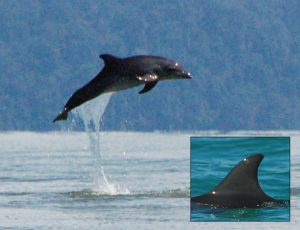 Dolphins are arguably the most delightful animals to watch. While seeing them is always a thrill, it’s even more exciting to be able to distinguish the species and have enough knowledge about behavior to fully enjoy their aquatic antics.