Posted at 16:10h in Uncategorized by Intern Osa Conservation 0 Comments 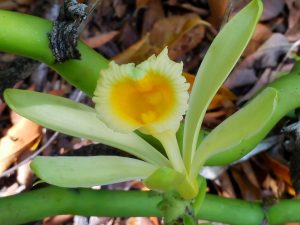 The beneficial mycorrhizal fungus found in large amounts in wild plants on Osa Verde. This fungus is one that gives several benefits to the plant.

Beginning four months ago, the National University, Osa Conservation, and University of Costa Rica have been uniting forces in order to carry out the establishment and development of organic mother vanilla plants in the Osa. Since the cultivation is very profitable, it would be a good economic opportunity for the farmers in the southern part of the country, many of whom do not have job opportunities. A trial plot has been placed on Osa Conservation’s Osa Verde farm.

One of the problems facing the cultivation of vanilla is that of pests and diseases that affect a part or all of the cultivation. Often the use of agricultural chemicals has controlled these problems but we are undertaking a completely organic trial. Beneficial microorganisms from University of Costa Rica’s Agricultural Microbiology laboratory strains bank and other beneficial microorganism that already have been isolated from Osa Verde’s forest soil are being utilized for this trial. The microorganisms will be multiplied and evaluated in the trial. In this work, one creates an organic techno 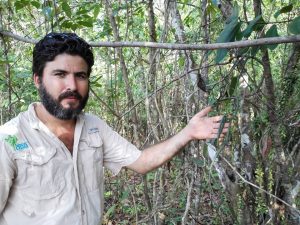 logy packet, a base of bacterias and and fungi that serve to control the pests and diseases.

Additionally, we intend to provide local farmers that are interested in sowing vanilla with high quality cuttings for the plant with the desired characteristics of vanillin. These cuttings can be purchased on the market, but the sales of these species of vanilla is often of poor quality. In order for the farmers to undertake their own production and gain access to the market, both nationally and internationally, the National University will help by serving as a guide and collaborator.

In order to carry out this research, the following objectives have been defined:

This exciting research happening on Osa Verde is just on example of how we are partnering with academic institutions and researchers to conserve the Osa and it’s biodiversity; create a sustainable and local food production system; demonstrate best practices to visitors; and also provide economic alternatives to locals.