In February 2016, 13 undergraduate students and faculty members from the University of Alberta’s Augustana Campus in Camrose traveled from snowy Canadian winter, to the Osa Peninsula as part of a year-long tropical ecology and conservation course. This trip was the culmination of five months of preparation that included learning about neotropical biota, developing our field research proposals, and organizing trip logistics. For most of us the dream of an adventure to Costa Rica was many years in the making, and for all of us it became a trip of a lifetime.

After a day-long drive from San Jose, we experienced a world unlike anything we had previously known upon our late afternoon arrival at Piro. Following a delicious first supper, we donned our headlamps and entered the forest guided by our curiosity and the long anticipated first-hand view of the ecology that we had thus far only learned about in the classroom. We walked from leaf to leaf in utter amazement at all we saw, including spiders, scorpions, and insects. With our first sighting of a katydid we were confident that our project inventorying these insects would be a success. The sounds of the Osa peninsula were equally stunning. Between the restless bird and insect calls, we could barely hear ourselves think. However, once these calls subsided, we were made aware of a much more powerful sound; the ocean in the distance ceaselessly crashing upon the shore had us looking to the skies in fear of thunder showers that never came. 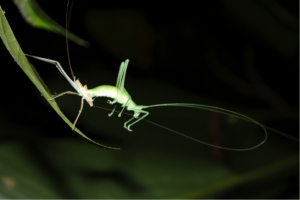 As a welcome to Piro, on our first night we witnessed a katydid molt right before our eyes.

Even more impressive were the sounds experienced during our first early dawn where the ocean’s booming waves created a remarkable backdrop for the chorus of howler monkeys whose calls could easily be mistaken as some terrifying creatures of the night. These sounds only added to the mystery of the Osa. 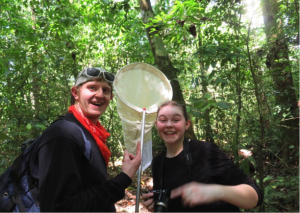 The katydid research team (aka katydids) , Samuel (left) and Emily (right) were excited to find many different species of katydid on the Piro trails.

Our first full day was incredible. Between our early morning beach walk and our fun around the research station, we had already seen three of the four monkey species (spider, squirrel, and capuchin), many hermit crabs, pelicans, and hatched turtle eggs. As if our introductory day was not good enough, we ate the freshest fruit and had the coolest showers, which quickly became staples of the trip.

The bat research team excited to catch and release their first bats. From left to right: Evan, Jonathan, and Kieryn.

While our trip to Costa Rica promised to be an adventure, we could not forget about the research projects that we had spent so much time developing prior to our arrival at Piro. We were grouped into four research teams. The katydid team set out to create the first katydid inventory on the Osa Peninsula. The bat team focused on evaluating the local abundance of leaf-nosed bats in comparison to broader neotropical trends. The understory vegetation group investigated the relationships between plant diversity and environmental factors (e.g., canopy cover, soil moisture). The forest structure team evaluated habitat characteristics (percentage of understory density and canopy cover) and their relationships to old growth, secondary, and gallery type forests. Up to this point in our university studies, we had not anticipated the unpredictable and adaptive nature of research that we experienced at Piro. 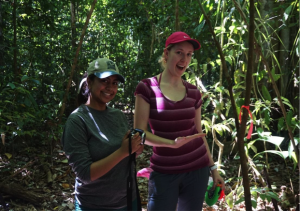 The vegetation group, Jaynita (left) and Carly (right), posing next to one of their first survey plots.

While we progressed further into our research, we were surprised by how busy the days became with three to four simultaneous project activities; there was little time to rest between activities. One of the benefits to being in such a large and tight-knit group was the many helping hands. Our tailgate meetings every morning allowed us to identify the course of action for each day. Hard work and enthusiasm to share in each other’s research were important characteristics of our time spent at the station.

Despite the rapid pace of our sampling, we continued to make time to appreciate the Osa Peninsula’s beautiful sights, sounds, and smells throughout our trip. Early morning starts allowed us to look for sea turtles with our volunteer hosts. The beaches at pre-dawn were beautiful, and these treks gave us the opportunity to feel the soft sand on our toes, see some falling stars, and even experience a small earthquake first hand while others were still sleeping. Through our early morning hike on the discovery trail, we encountered a diversity of wildlife including cheeky monkeys and a quickly fleeing curassow who, like us, must have been in a hurry to get to breakfast. We also enjoyed our guided tour of the Osa Verde farm with Beatriz. Coming from rural Alberta, it was incredible for us to see the amazing diversity of agricultural plant life and sustainable practices, in contrast to large scale monoculture farming. This experience was enhanced by Lassie (the lovely farm dog) and Hermes’ hospitality in providing us a snack of freshly cut coconut. 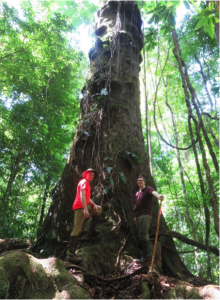 The habitat characteristics research group, Shane (left) and Tye (right) taking a break from their survey and admiring the mighty ajo tree.

There were times when we could not help but feel a spiritual connection to the land. We felt the age and experience of the large ajo trees and the vulnerability yet surety of the newly hatched turtle that we guided to the ocean. In doing so, we were constantly reminded of our place within the universe. Being present within every waking moment, and actively engaged with the natural environment rather than a passive bystander was a much needed change from our hectic lives back home.

During our final day at Osa we hiked up (both ways) to the Greg Gund Conservation Center. We were amazed to see how quickly the forest is regenerating from its past use as pastoral land and teak stands. Our journey also highlighted what a fantastic group we had. On the hike, as on any other day, we always managed to laugh (editor’s note: this may not be helpful when trying to spot elusive wildlife) despite being hot, sweaty, and smelly. We even had enough steam to play a game of bocce ball at the peak! Although the trek was long and the heat was intense, it was worth every moment just to see, from a new perspective, the whole preserve where we had been studying and learning. With the view from Greg Gund Conservation Center, we understood the magic of the Osa, and its conservation value. We also appreciated how our research project contributions may also contribute towards the goal of conserving the Osa Peninsula.

We are grateful to the OC staff for sharing their knowledge, time, and their generous hospitality. See you next time Piro! 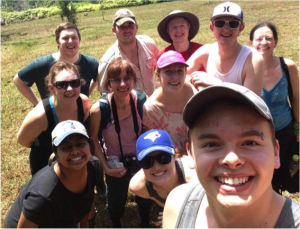 One big happy group at the top of the Greg Gund research station.