Posted at 00:04h in Science and Research by Intern Osa Conservation 0 Comments

Arriving in Costa Rica to work on the largest camera trap monitoring effort in Central America was a new, much bigger challenge than I am used to. I was excited for the experience ahead.

I have worked as a tropical wildlife biologist in my home country Peru for a couple of years now, and my camera trapping experience only existed on small-scale projects at a single study location. Here in Costa Rica, over 200 camera traps were planned to be deployed from ridge to reef to assess wildlife populations across three protected areas and their connecting biological corridors along an elevational gradient. The effort will generate information to guide conservation strategies and restoration efforts across the Osa region. 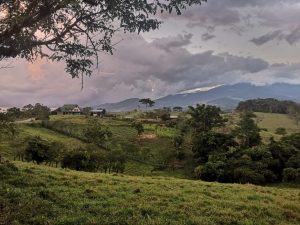 La Amistosa Corridor is a mixture of forest patches, plantations and pastures. These are the forests that we’ll connect to ensure wildlife dispersal. Photo by: Markus Mejía Burmann.

The survey line started at our Osa Conservations biological station, wove through Corcovado National Park and went all the way into La Amistad International Peace Park on the Panamanian border, covering the Amistosa Biological Corridor that connects the Osa Peninsula to the Costa Rican mainland. 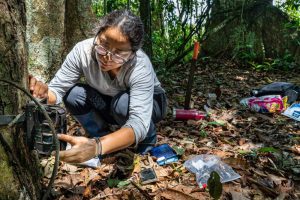 Camera traps changed the way we do science. They allow us to unveil the secrets of the elusive wildlife. Photo by: Andy Whitworth, Executive Director, Osa Conservation.

The project is ambitious. Alone, it would be impossible. But, thanks to the creation of the Ridge to Reef Camera Trap Network — a diverse group of stakeholders encompassing local communities, eco-lodges, NGO’s (like Osa Conservation), government organizations and national and international universities — we can achieve region-wide monitoring for conservation.

Throughout the ridge-to-reef mega survey, camera traps were installed in protected and unprotected, private properties. During previous experiences in Peru, where I have spent most of my career, I encountered reservation from people in conserving the wildlife they live alongside. Naturally, I thought the attitude here would be the same. Surprisingly, since day one, everyone I approached and interacted with was interested in the mega survey project and was more than happy for us to set up the cameras on their land. Soon, neighboring landowners began asking us if we could instal camera traps on their properties too, just to see what wildlife the camera would detect.

The landowners I met had impressive knowledge of the area, but of the many, Mr. Bernabe, a landowner in the Gamba area, is one that stands out. In his 60s and full of energy, he  spent the last decade trying to balance his need for cattle-ranching and agriculture production with the humanitarian need of forests for species like the collared-peccary – a New World pig. While walking through a forest patch on his property filled with palms, we encountered a group of collared peccaries. He said more than once: “I could cut these palms to plant more crops, but it is more important to keep the palms as food for them.” 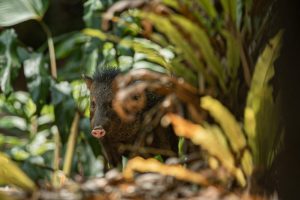 Mr. Bernabé, and everyone that participated in this effort, share a common trait: their interest in protecting the wildlife and the forest they call home. I have done conservation work across the Americas, and the desire of people in Costa Rica to protect the forest has no comparison. That trait will help ensure that the Ridge to Reef Camera Trap Community Monitoring Network persists and succeeds in collecting important information needed to push regional conservation efforts forward. 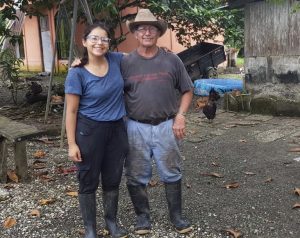